Dale McGowan holds degrees in music and evolutionary anthropology. His books include Sharing Reality: How to Bring Secularism and Science to an Evolving Religious World (with Jeff Haley, 2017) Parenting Beyond Belief (2nd ed. 2016), Raising Freethinkers (2009), Voices of Unbelief (2012), Atheism For Dummies (2013), In Faith and in Doubt: How Religious Believers and Nonbelievers Can Create Strong Marriages and Loving Families (2014), and the satirical novels Calling Bernadette’s Bluff and Good Thunder.

In 2009, Dale founded Foundation Beyond Belief. Under his leadership, FBB became the world’s largest humanist charity, raising over $2 million for philanthropic projects worldwide, launching a network of more than 100 humanist volunteer teams in the U.S., and creating groundbreaking disaster recovery and international service programs for the nonreligious community.

Dale and his wife Becca live near Atlanta with their three children.

All Posts by Dale 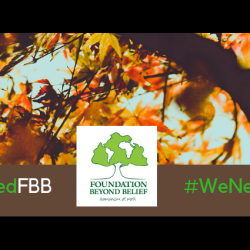 With Your Help, Foundation Beyond Belief Could Expand...

Help scale up the impact of compassionate humanism in 2019! Read more