NY Gov. Kathy Hochul to Church: The COVID Vaccine Is God’s Answer to Our Prayers

While some right-wing Christians have used their massive platforms to spread misinformation and doubt about the COVID vaccine, discouraging people from getting their shots or claiming that mask mandates are somehow a violation of their freedoms, others have defended vaccines and mask mandates in the name of their faith.

We’ve pointed out before that MAGA-loving Pastor Robert Jeffress as well as evangelist Franklin Graham have urged people to get vaccinated and called the shots a “gift from God.”

And while some governors have used their faith as justification to avoid getting the virus under control, New York Gov. Kathy Hochul is taking the opposite approach, proving that #NotAllChristians are irresponsibly dealing with the pandemic.

Hochul was attending a service at the Christian Cultural Center in Brooklyn on Sunday and delivered a brief speech to the crowd. It’s no surprise she’d use the language of her own faith while speaking to them — which isn’t a violation of church/state separation or an illegal form of proselytizing, in case anyone’s curious — but it was especially interesting to hear Hochul urge the congregation to get their shots because the vaccines were an “answer to prayer“:

We are not through this pandemic. I wished we were but I prayed a lot to God during this time and you know what — God did answer our prayers. He made the smartest men and women, the scientists, the doctors, the researchers — he made them come up with a vaccine. That is from God to us and we must say, thank you, God. Thank you.

And I wear my ‘vaccinated’ necklace all the time to say I’m vaccinated. All of you, yes, I know you’re vaccinated, you’re the smart ones, but you know there’s people out there who aren’t listening to God and what God wants. You know who they are.

Is it a speech that atheists will appreciate? Probably not. But as far as a politician using the language of faith to reach an audience that desperately needs to get vaccinated — but might not because other prominent Christians are feeding them lies — it’s arguably effective.

Hochul spoke about how the shots were needed for the sake of kids in schools and those who are sick from non-COVID conditions. To be honest, it’s precisely the sort of speech you would expect a “pro-life” Christian to make… if they actually care about their principles beyond the womb.

As many other Christians would tell you, Jesus talked far more about “turning the other cheek” and “picking up your cross” than defending arbitrary personal “freedoms” that could put innocent people in danger. We’re so used to hearing right-wing politicians use faith as a weapon to hurt others that it’s almost jarring to hear a left-wing politician use faith to help her constituents.

But if it helps Christians get vaccinated when some of them might choose otherwise, then perhaps that outweighs any criticisms people may have of her speech. 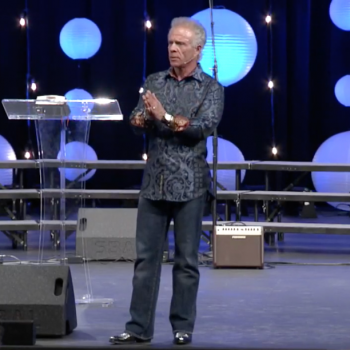