Pastor Robert Jeffress of First Baptist Dallas in Texas has spent much of the past few years defending All Things Trump during a slew of appearances on FOX News. He blames Satan for things that make his side look bad and just makes things up when he’s got nothing else to say.

But when it comes to vaccines, he’s been one of the more reasonable voices among unreasonable white evangelicals. Here he is speaking with the Associated Press: 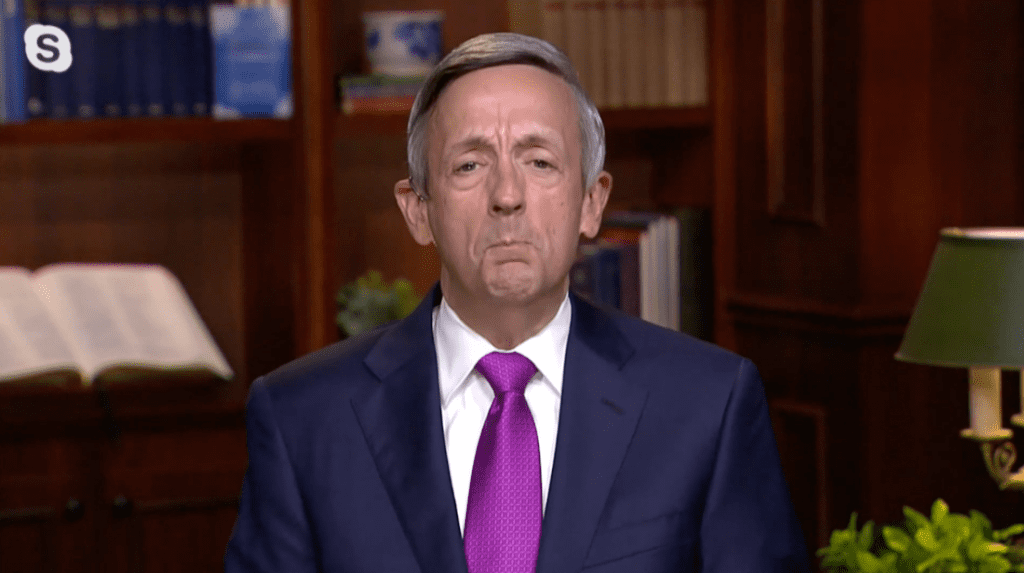 The Rev. Robert Jeffress of First Baptist Dallas, a Southern Baptist megachurch, said he and his staff “are neither offering nor encouraging members to seek religious exemptions from the vaccine mandates.”

“There is no credible religious argument against the vaccines,” he said via email. “Christians who are troubled by the use of a fetal cell line for the testing of the vaccines would also have to abstain from the use of Tylenol, Pepto Bismol, Ibuprofen, and other products that used the same cell line if they are sincere in their objection.”

Jeffress is saying what the Conway Regional Health System in Arkansas said earlier this week — if people are citing their faith to avoid the vaccine because they believe it’s an endorsement of abortion, as distant as it may be, then they should stand by their convictions and avoid all drugs/medicines developed through the same cell lines.

Jeffress is like Pat Robertson that way. Every now and then, he says something sensible and it’s shocking. Neither man deserves special praise for saying one right thing when they’ve dedicated their careers to spreading other forms of misinformation, but in the case of Jeffress this week, good for him. He got this one right.

Don’t give him too much credit, though. Remember that last June, before the vaccines, when Vice President Mike Pence came to visit, Jeffress held a massive indoor service for thousands of people where masks were merely encouraged. Jeffress is no COVID hero. He’s just aware of the power of vaccines.

Next step: watching him say all this on FOX News.