Can a Middle School Principal Be Fired for Spreading Bigotry as a Church Pastor? September 23, 2021 Hemant Mehta

Can a Middle School Principal Be Fired for Spreading Bigotry as a Church Pastor?

Watch this video posted by the Church of Tolerance page on Facebook. It features Pastor Joel Whitcher and his wife Pam Whitcher speaking at their church, the Fresh Fire Worship Center in West Olean, New York.

The sermons are disturbing. Not exactly surprising coming from fundamentalist Christians, but shocking nonetheless.

At the beginning, you hear Pam talking about how they are “expanding His kingdom beyond these walls, into the community, into the governmental positions in Olean, into the school systems…”

He calls out Christians who voted for Democrats, claiming they support “sex change operations for children” and “forcing Christian churches to marry homosexuals.” (Literally not true.)

Speaking of Bible verses condemning homosexuality, he says, “Men committed shameful acts with other men and received in themselves the due penalty for their error. It’s a sin. It is the enemy coming out in the light… We’re finally seeing what we need to go kill. Tolerance is killing the church.”

He dismisses mental illness, too, saying medication isn’t necessary to treat something like schizophrenia because “we have deliverance.”

In a separate compilation video, it gets worse in different ways.

In that one, Joel talks about the alleged “socialist agenda” in public education, dismisses free breakfast and lunch in public schools because “the spirit of poverty has hit the homes” and “people don’t have the urge to go and work.” He also claims being a True Christian™ means you won’t be “susceptible to COVID.”

All of this would be troubling coming from any pastor, period.

Here’s the kicker: Joel Whitcher is the principal of Olean Intermediate Middle School.

Pam Whitcher is a psychologist at Cuba-Rushford Elementary School.

Now people are demanding the school board take action — not because they hold bigoted Christian beliefs (as is their right), but because children simply aren’t safe with those people in positions of power.

A Change.org petition signed by more than 1,500 people so far puts it bluntly:

… The student body finds Mr. Whitcher’s behavior absolutely intolerable. No administrator that governs an extremely diverse student body has the right to publicly discriminate and hate members of his own community and school.

Superintendent Rick Moore (Joel Whitcher’s boss) told local reporters that he couldn’t comment on personnel issues, but said, “We do believe that we can come to an agreement… I think it’s going to be a happy ending actually.” Whatever that means.

There were, however, many people speaking out against Whitcher’s behavior at a school board meeting this week as well as a separate student protest.

But here’s part of the problem: No one has cited any evidence that Whitcher’s Christian bigotry has seeped into his job. There’s no evidence of him discriminating against Muslim or gay students, giving students a sub-par education because he doesn’t like the curriculum, or proselytizing on the job.

We know what he really thinks, but the question remains: Can someone be fired for creating a kind of disturbance that makes students feel unsafe under his leadership?

WGRZ-TV spoke with Paul Cambria, a constitutional expert, who said the issue wasn’t clear-cut. Of course Whitcher has the right to free speech and his religious beliefs, but if those beliefs invade the school walls to the point where learning is disrupted, a school board could take action.

For now, both Whitchers remain in their jobs.

(Thanks to @IwearCrocsAlot for the link) 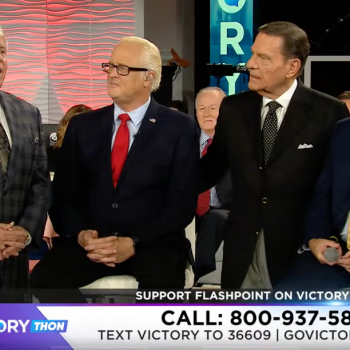