Your Favorite Scamvangelists Are Bragging About Their Private Jets Again September 23, 2021 Hemant Mehta

Your Favorite Scamvangelists Are Bragging About Their Private Jets Again

Listening to televangelists brag about their private jets never gets old. It’s an obvious sign of their personal wealth as well as their hypocrisy: They always want you to give for the greater good, but they don’t want their followers to notice how much they’re enriching themselves. If anyone calls them out on it, they simply insist God wants them to be wealthy and that private planes are necessary for their ministries, no matter how flimsy that argument may be.

The two worst culprits of this are Jesse Duplantis and Kenneth Copeland.

Copeland, of course, famously said in 2015 that he needed a private jet to avoid flying in a “long tube with a bunch of demons.” (He’s avoided those demons, apparently, on more than 143 flights to a ski resort in Colorado since 2000.) He also asked his followers to donate $2.5 million for upgrades — and even more for storage space.

Duplantis was more recently called out for taking a $14,000 one-hour private flight that would’ve cost normal people $200, then saying he needed the plane to spread the gospel, even though he used that same plane for 16 personal vacations to Hawaii.

Both of those men recent appeared on Copeland’s recent “VICTORYthon” (to raise money for his ministry) where the subject of their planes came up again.

Duplantis celebrated having his personal plane and being a “multi” millionaire while claiming that an increase in donations would “speed up” the return of Jesus.

Participating in a "Victorython" fundraiser for Kenneth Copeland's ministry, right-wing pastor Jesse Duplantis brags about being a multi-millionaire with his own private plane while telling viewers that they can "speed up" the return of Christ by donating. pic.twitter.com/3VE6sETWBB

… I honestly believe this: That the reason why Jesus [hasn’t] come is because people are not giving the way God told them to give. You see what I’m saying? I mean, when you understand, you can speed up the time.

Don’t worry, though. Duplantis insisted that after he’s raptured, anyone who wants it can have his jet.

Copeland followed up with his own justification for needing private planes: There’s no vaccine mandate for those.

Kenneth Copeland argues that he needs a private jet because airlines are imposing vaccine requirements and "to me, that's the Mark of the Beast." https://t.co/pWZsRLY5PH pic.twitter.com/x0HaenznuY

… You get into this situation, “We’re not gonna let you fly unless you’re vaccinated.” Well, to me, that’s the Mark of the Beast. Not the vaccination — I’m not taking the vaccination, but you can do what you want to do…

So the vaccine itself isn’t the Mark of the Beast, but vaccine mandates to use airlines are. And that’s why Copeland needs your money.

You would think none of this would even affect Copeland given that, back in March of 2020, he insisted that COVID was “finished.” He even spit on it and said the virus was “destroyed.” And then, just last month, he said it was destroyed again. Getting the shot, then, should be irrelevant to someone like him. But he’s treating it like some unreasonable demand.

That’s why refusing to acknowledge the existence of COVID — and refusing to protect himself and others against the spread of the virus — is now a point of personal pride for him. He can’t get in a plane because he would have to be vaccinated, which would mean admitting he got protection against a disease he claimed to eradicate more than a year ago, and he can’t bring himself to do it. (Or at least admit it publicly.)

Therefore, he needs millions of dollars for his ministry to maintain his expensive demon-free lifestyle.

(via Right Wing Watch. Portions of this article were published earlier.) 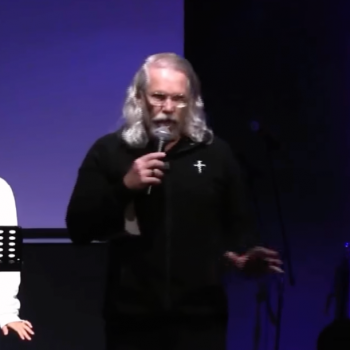 September 23, 2021
Can a Middle School Principal Be Fired for Spreading Bigotry as a Church Pastor?
Next Post 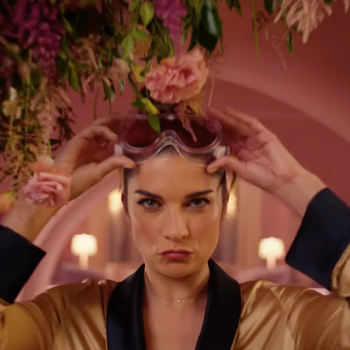 September 24, 2021 Angry Christian Mom Boycotts Phexxi Birth Control Ad Due To "Sexual Perversion"
Browse Our Archives
What Are Your Thoughts?leave a comment