Monica Cole, the one mom at One Million Moms (Twitter count: 4,137), is mad at Sonic Drive-In.

The Christian Right group known for constantly complaining about any and every culture war issue is furious that a recent ad for the restaurant features two moms discussing their “deepest secrets about their times at Sonic.”

WOMAN 1: I’m gonna tell you a secret since we’re in the car… alone. I have been to Sonic in my pajamas. Have you?

WOMAN 1: Oh, definitely without a bra on!

WOMAN 1 (voiceover only): I never wear a bra when I drop the kids off at school!

Is it funny? Your mileage may vary. All I took from that ad is that you can eat at a Sonic wearing extremely casual clothing. And that women dressing casually — or in a rush in the morning — might not stop to put on a bra.

But Monica Cole thinks the ad will traumatize kids.

… One Million Moms finds this highly inappropriate for an ad, especially one selling food. When writing and producing this commercial, someone with Sonic thought this was a great way to represent the company and approved this type of marketing. Sonic could have simply chosen to leave this out of their commercial.

Sonic’s ad is tacky and offensive. It is irresponsible because of its impact on impressionable children viewing the commercial. We all know children repeat what they hear. Does Sonic want children to think it is OK to go around in public wearing no underwear?

You know what I find “highly inappropriate”? Chick-fil-A ads in which cows urge people to “eat mor chikin” because it’s better that chickens get violently slaughtered instead of them. Somehow, One Million Moms doesn’t think twice about animal cruelty. But two moms admitting they don’t always put on a bra? BLASPHEMY!

You would think a group for moms would understand that relaxed feeling better than most. But empathy isn’t one of Cole’s strengths.

September 3, 2021
Donald Trump Still Doesn't Get Why All Catholics and Jews Didn't Vote for Him
Next Post 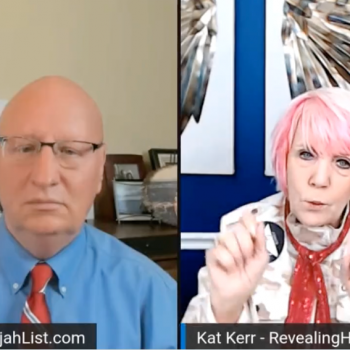 September 3, 2021 Christian “Prophetess”: God Will "Do Something" to Restore Trump as President
Browse Our Archives
What Are Your Thoughts?leave a comment