Dr. Fauci, Speaking to Atheists, Notes How His Jesuit Upbringing Has “Evolved”

The American Humanist Association announced over a month ago that Dr. Anthony Fauci would receive its highest honor: The Humanist of the Year award.

While his speech was broadcast during the AHA’s annual (and, this year, virtual) conference, it’s finally online for the rest of us to see:

There’s nothing particularly new in there for anyone’s who’s been listening to Fauci, especially since the start of the pandemic, but a couple of passages really stand out:

… The Jesuit education I had the good fortune to receive in high school and in college inspired my interest in philosophy and imparted important life principles. My outlook has since evolved to align with the concept of making the world a better place, rather than being involved in any organized religion. Yet these Jesuit principles have been an invaluable guide for decades in my role as a public health official.

… Safe and highly effective COVID-19 vaccines, developed in record time, are now available to anyone in this country age 12 and older. Nearly 68% of Americans 18 and older have received at least one shot of the vaccine, and this progress inspires us to persevere, scientifically, firmly believing that science will continue to illuminate our understanding of this new illness and how to treat and prevent it, thus lighting our pathway out of this pandemic…

There’s nothing particularly controversial about his remarks. He’s certainly not anti-religious. But that’s not a bad thing at all. It shows that secular leaders in government positions, guided by reason and science, can have an extremely positive impact on our world.

Fauci would never be mistaken for some kind of secular activist, but by communicating facts and sticking to science, he’s doing more to help people than so many religious leaders whose decisions have frequently put their own church members in danger while allowing COVID to spread and mutate.

While Fauci’s faults are well-documented, not many people over the past year have done as much good without God. 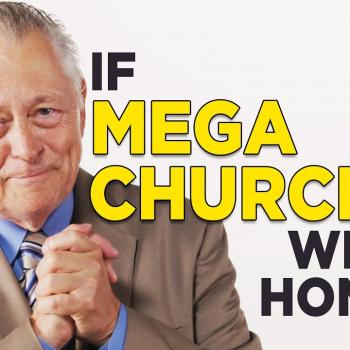 August 12, 2021
This Parody Ad for a Megachurch Is Way Too Accurate
Next Post

August 13, 2021 Ex-"Purity" Advocate Joshua Harris: Buy My Course If You Feel "Shame Around Sex"
Browse Our Archives
What Are Your Thoughts?leave a comment