A Christian Preacher Demanded Modesty on the Beach; This Woman Wasn’t Having It. July 22, 2021 Beth Stoneburner

A Christian Preacher Demanded Modesty on the Beach; This Woman Wasn’t Having It.

In a video going viral on TikTok, a young woman confronts a Christian preaching about the need for modesty… on a Florida beach.

Naturally, the reception isn’t positive from Katie Simmons, who captured the video, or the hundreds of thousands of viewers commenting on her post.

It’s worth pointing out the context of that verse. When most of us hear the word “modesty,” we think of clothing that doesn’t show much skin. But in 1 Timothy 2:9, the writer is referring to hairstyles, expensive clothing, and fancy jewelry — common indicators of wealth, not sexuality. In other words, calling on women to be “modest” likely refers to them being humble about their social status and not flaunting it.

In any case, why is it only the woman’s burden to dress modestly? What about the “stumbling block” presented by certain men in Speedos or who simply bare their chests? (Women can be visually stimulated, too!)

But Simmons wasn’t arguing theology with him. She merely asks, “Sir, it’s a beach. Are we supposed to dress modest at a beach?” She follows that up with a simple, “What if God’s fake?”

Will she change his mind with that line? No. But a guy who walks around on the beach with a sign calling for modesty isn’t really the type of person who cares what you think about anything. He’s doing this for himself, not for you. And if he can’t handle what he’s seeing, then he can always take up his cross and avoid beaches. Discipleship requires sacrifice, after all. 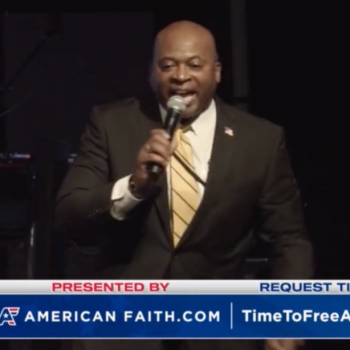 July 21, 2021
Pastor to Pro-Conspiracy Crowd: "Trump Gave His Life to the Lord Jesus Christ"
Next Post 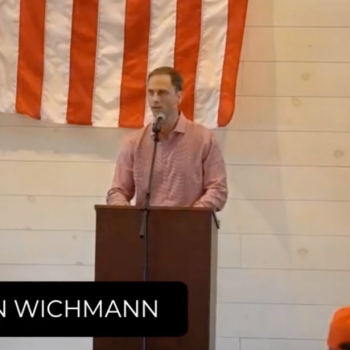