Over the past few days, a number of people have chimed in on Richard Dawkins‘ controversial tweet about transgender people.

I said last week that original comment was dehumanizing, and I stand by that characterization because it compared trans people to Rachel Dolezal (who brazenly lied about her racial identity), implied that trans people “choose” to adopt a different gender (which is not what they’re doing), and whined about how anyone questioning their identity is “vilified” (what does he want, a hug?)… all while treating this topic as some kind of academic debate instead of right-wing fodder that ultimately harms the lives of trans people.

The backlash went into overdrive after the American Humanist Association announced on Monday that it would retroactively withdraw the “Humanist of the Year” award they bestowed upon him in 1996, citing his multiple controversial tweets which “use the guise of scientific discourse to demean marginalized groups.”

(I’ve heard people say the AHA could’ve just criticized his statement without revoking the award, a move some critics are claiming was silly or petty, but that would’ve lacked bite. If the AHA’s board truly believes what Dawkins said was harmful, rescinding a major award they gave him is honestly the only leverage they have over him. And while other past Humanists of the Year have their own problems, like Margaret Sanger (1957) and Alice Walker (1997), no one represents atheism to the broader public like Dawkins does.)

Anyway, over the past couple of days, a number of other prominent (or once-prominent) atheists and skeptics have weighed in on the matter, many of them on Dawkins’ side. I thought it’d be helpful to post their comments below in case anyone’s wondering what some of the people who influenced them are now defending. I’ll post them with as little commentary as possible since I think my own position is clear on this.

Get ready for a whole bunch of people who use “woke” as a pejorative while praising themselves for being The True Rational Classically Liberal Critical Thinkers™.

Absolutely scandalous and cowardly. @RichardDawkins is the Humanist of the Century. It is anyone's guess why the @americnhumanist would succumb to the Woke mob. Regardless of their blatantly irrational decision, Dawkins will be celebrated as the true voice of reason that he is.

How illiberal is the @americnhumanist ? These tweets from @RichardDawkins constitute evidence of bigotry so hateful that his AHA Humanist of the Year award was withdrawn. This is beyond illiberalism. It's pure woke insanity & just feeds real bigots who think THIS = liberalism. No pic.twitter.com/QetFWw0Lo4

Peter Boghossian (author of A Manual for Creating Atheists):

Another atheist organization has fallen to wokeness.

Wokeness is a universal solvent that corrodes and destroys everything it contacts. https://t.co/Sb4igKpIZl

Jerry Coyne (author of Why Evolution is True):

… It is true that people who raise arguments against the acceptance of say, transsexual women as completely identical to biological women are unfairly maligned (viz., J. K. Rowling), and the “unfortunate” word “choice”, which is technically accurate, should be interpreted charitably, not as an attempt to denigrate transsexual people.

These days, a more charitable attitude is needed by many of us, but especially by the censorious Left, which seems gleefully eager to pounce on awkward tweets or even purely innocuous statements and deeds (i.e., wearing Hawaiian shirts!), and then damning the transgressors for good. This kind of reaction will not produce social progress. And it’s sad to see that Hemant, at least in this case, has joined the ranks of the Unempathic Offended.

Sam Harris (author of The End of Faith):

Bold move for a struggling organization: When everyone has forgotten you exist, why not remind them by committing suicide? https://t.co/CRK4QCfIKd

Please pretend we are still relevant and that Dawkins still gives a fuck about our impotent mess of an org.

Don't pay attention to the inactivity. Watch the virtue signaling. White man bad, give us money so we can continue to accomplish zero things for atheism. We are heros. https://t.co/E6RIlRt4dm

This is a great example of how insanely authoritarian and irrelevant the humanist/atheist movement has become.

The #woke have retarded the movement and turned it into a secular orthodoxy of hyper-policed opinions.#Wokeism poisons everything. https://t.co/wA6OpQRN7A

The AHA statement about Dawkins rejects the interpretation that he was pointing to an apparent inconsistency in the current norms of political correctness, while simultaneously providing an example of precisely the confused thinking that he claims he was pointing out. Discuss.

Todd Stiefel (a prominent donor to a number of atheist organizations): 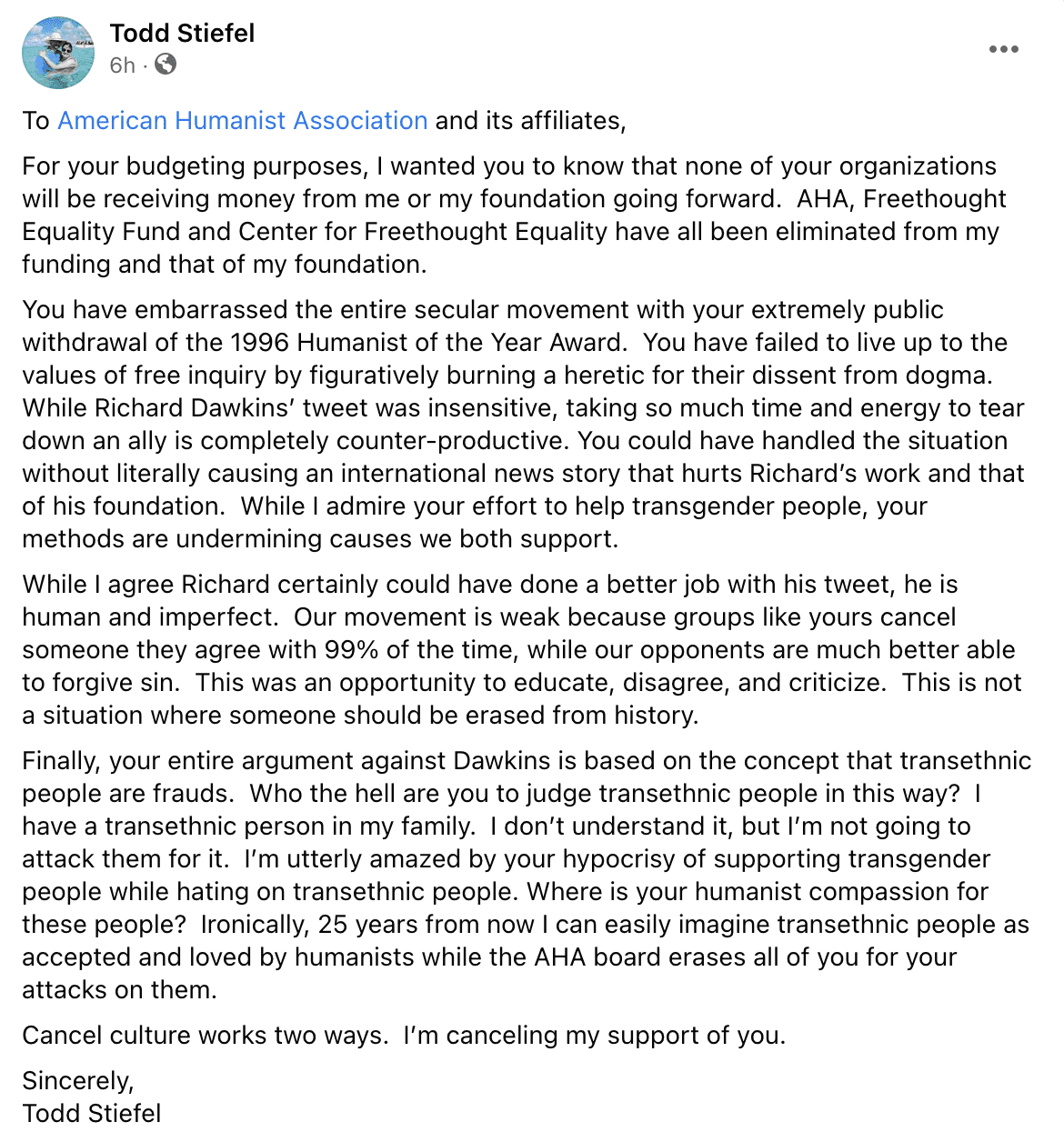 You have embarrassed the entire secular movement with your extremely public withdrawal of the 1996 Humanist of the Year Award. You have failed to live up to the values of free inquiry by figuratively burning a heretic for their dissent from dogma…

Finally, your entire argument against Dawkins is based on the concept that transethnic people are frauds. Who the hell are you to judge transethnic people in this way? I have a transethnic person in my family. I don’t understand it, but I’m not going to attack them for it. I’m utterly amazed by your hypocrisy of supporting transgender people while hating on transethnic people. Where is your humanist compassion for these people? Ironically, 25 years from now I can easily imagine transethnic people as accepted and loved by humanists while the AHA board erases all of you for your attacks on them.

Dawkins did not call for discrimination against or marginalization of any individual or group. And he explicitly denied any intention to disparage anyone or to lend support to transphobic or racist political movements. Now, it would still be completely appropriate for those of you who objected to the substance of his tweets to criticize them in The Humanist or other forums, explaining the nature of their objections. But to seek to punish, dishonor, or humiliate a writer rather than engage with his words is a betrayal of humanism.

The Humanist Manifesto III declares that “the lifestance of humanism [is] guided by reason.” Since no one is infallible, reason requires that a diverse range of ideas be expressed and debated openly, including ones that some people find unfamiliar or uncomfortable. To demonize a writer rather than address the writer’s arguments is a confession that one has no rational response to them.

This illiberal response is all the more damaging to an organization that claims to repudiate the repressive practices of religion. It has not been lost on commentators that an association of “freethinkers” has deemed certain thoughts unthinkable, nor that it is enforcing dogmas and catechisms by excommunicating a heretic. The AHA is turning itself into a laughingstock.

Give it time. The professional comedians will weigh in soon enough, I’m sure.

I should point out that there are several well-known atheists who have been critical of Dawkins, too. Not everyone is jumping to his defense like the people above. But unfortunately, when reporters want to talk to a prominent atheist, they’re far more likely to ask the people mentioned above. Those reporters can do so much better.

***Update***: You can see what more thoughtful atheists are saying about Dawkins on this thread.

April 22, 2021 A Creationist's $536,041,100 Lawsuit is Getting Laughed Out of the Courtroom
Browse Our Archives
What Are Your Thoughts?leave a comment