Tony Perkins: Getting Rid of the Filibuster Would Lead to the “End of America” April 11, 2021 Hemant Mehta

Tony Perkins: Getting Rid of the Filibuster Would Lead to the “End of America”

Christian hate-peddler Tony Perkins of the Family Research Council and fellow right-wing preacher Jim Garlow aren’t known for their intelligent takes, but this is bad even by their standards.

Speaking on Perkins’ podcast this week, the men complained about the (distant) possibility that Democrats might get rid of the Senate filibuster and actually get things like voting rights and immigration reform passed.

Considering how the filibuster has historically been used to stifle civil rights, and is now used to block damn near anything Democrats want to get done, it’s hard to find any rational defense of it, but Perkins and Garlow had one ready: It would destroy the country forever.

On the podcast, Perkins claimed that the filibuster is “the one thing standing between the radical left and the end of America as we know it.”

“I’m not gonna sugarcoat this,” Perkins said. “If the filibuster goes, our country is at the mercy of the most evil legislation we’ve ever seen.”

Garlow agreed, calling the Equality Act and the For the People Act “radical legislation” that would have been “inconceivable” a few years ago…

So they’re opposed to civil rights for LGBTQ people and voting rights for Black people. Sounds about right for Christian bigots like them, both of whom believe the Big Lie that Joe Biden isn’t the legitimate president.

Perkins didn’t complain about getting rid of the filibuster when Republicans ditched it in order to shove through more Supreme Court nominees. So why the change of heart? Simple: He’s a hypocrite who has a problem with anyone who doesn’t look like or believe as he does. He refuses to accept facts. He’ll pretend he cares about bipartisanship, but only when Democrats are in power. And his idea of the “end of America” is one where people aren’t discriminated against because of who they are or what they look like.

When you’re a racist, sure, that seems awful. And our nation will be better off when people like Perkins lose this battle. It’s just too bad that some Senate Democrats like Joe Manchin and Kyrsten Sinema are currently siding with the racists — and using the same bullshit arguments in defense of the filibuster — instead of supporting the party and people they claim to represent. 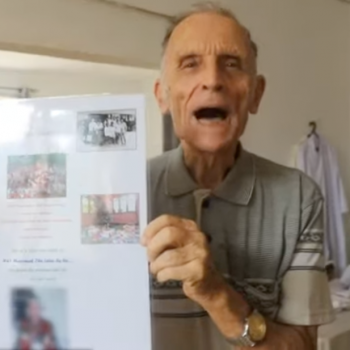