Nebraska preacher and false prophet Hank Kunneman of One Voice Ministries, who still hasn’t apologized for his wrong predictions about Trump serving a second term and who says Joe Biden is only president because of “treason,” is still clinging to those false claims.

He urged his flock this week to continue believing in “prophets” like himself because their predictions would eventually come true.

“President Trump won the election,” Kunneman asserted. “So, for people to say, ‘Well, people prophesied that he’d win,’ he did win, and so we had a stolen election.”

And I’m a New York Times bestselling author. Saying it over and over again doesn’t make it so.

“I’m sensing very strongly by the signs that God has given … that we are close to justice and righteousness being established,” he said. “What we cannot do is quit, give up, point the finger, and then begin to think, ‘Well, you know what? All of this was just a smokescreen.’ No, that’s what the enemy wants because it’s a sad day if all of God’s messengers, prophets, intercessors, [and] Christians were somehow wrong and the fake news that we know has been fake news were the voice of truth. I don’t think so.”

Maybe God is sending Kunneman a very different sign. (Or none at all.)

Again, we repeat: No evidence for a fraudulent election was found. If you want evidence of people messing with elections, look to the Republicans trying to restrict voting rights in Georgia, Texas, and other states where they have the power to do it. They want to make it tougher to vote because they know a lower turnout and more obstacles hurts Democrats more than it’ll hurt them. Kunneman doesn’t seem concerned about any of that. 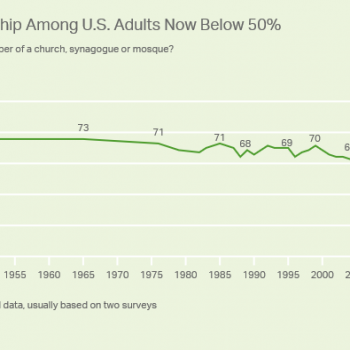 April 3, 2021
America is Better Off in the Long Run With the Drop in Church Attendance
Next Post

April 3, 2021 Please Support the Work I Do Through This Site
Browse Our Archives
What Are Your Thoughts?leave a comment