Earlier this month, the head of Iowa’s Center for Faith, Sexuality and Gender, Dr. Preston Sprinkle, gave a talk at Tennessee’s Lee University (a private Christian school) about how people of faith needed to show compassion for LGBTQ people. Given the Center’s Christian foundation and knowing the audience, Sprinkle spoke in full-on Christianese, celebrating how a trans person he knew had left the church but later returned due to the love he received from a pastor.

My first reaction to that was rolling my eyes, as if the trans person’s worth was entirely dependent on whether or not he was sufficiently Christian.

But people affiliated with the school had a different problem with it: Sprinkle never told the audience that being trans was a problem. He never said same-sex marriage (or any sexual relationship between two people of the same gender) was a sin. He talked about compassion but never about how LGBTQ people who aren’t ashamed of themselves are destined for hellfire and eternal torture.

It got so bad, the Church of God — the Pentecostal denomination with which Lee University is affiliated — sent out a press release condemning the talk.

During his presentation, [Sprinkle] addressed sexual orientation and homosexuality in a manner that was contrary to Scripture, Church of God doctrine and teachings. The International Executive Committee has shared directly their concerns with Dr. Mark Walker and the leadership of Lee University.

Without doubt, there are numerous challenging societal issues facing the church that are being openly discussed. However, issues of marriage and sexuality must be predicated upon a sound Biblical perspective and church doctrine. The beliefs and commitments of the Church of God are our non-negotiables and should be clearly taught based upon the authority of Scripture.

It got so bad, Lee University’s president Mark Walker sent out a letter to basically apologize for what Sprinkle said:

… Let me first affirm that Lee’s position on sexuality is and always has been that the only biblically valid marriage is between one man and one woman; and that a biblical view of human sexuality teaches that God does not approve or condone sexual activity between individuals of the same sex.

Further, recognizing that Dr. Sprinkle’s articulation of repentance was somewhat ambiguous, I also affirm that Lee’s position on repentance is that all have sinned and come short of God’s glory…

… We consider chapel a sacred responsibility, so much so, that on those occasions when our invited chapel speakers “miss the mark,” we want to bring better clarity and understanding.

It got so bad, Walker apologized during the next chapel service for Sprinkle’s talk not containing enough hate:

… if I claim to truly love you, and I know that what you’re entering into — the choices you’re making — are going to bring hurt and harm and damage to your life, but I don’t warn you or tell you, I don’t really love you! See, speaking the truth to someone we claim we love is not a sign that we don’t love them. It’s just the opposite. It’s a sign that we do love them!

See everyone? It’s loving to be a bigot…

But that desire by the school and its church to correct a talk that called for compassion for LGBTQ people — even though that in itself is condescending and belittling — has spurred a different kind of outrage. Graduates of the school are furious about how all this was handled.

Wyatt Massey of the Chattanooga Times Free Press explains the reaction from alumni who felt the school’s reaction created an unsafe environment for LGBTQ students:

… Within hours they were messaging each other their concerns about student safety and what they could do to help those in the LGBTQ community, whom they felt Walker targeted in his talk.

They launched the Affirming Alum Collective to support LGBTQ students on Lee’s campus by connecting them with resources and other people who identify as LGBTQ. The group created a petition calling on Lee’s administration to recognize the danger posed to marginalized students. As of Friday afternoon, the petition had nearly 600 signatures.

Few of the students and alumni who spoke with the Times Free Press said they were surprised by what Walker said since the university aligns with Church of God doctrine. But many of the alumni were hurt and confused by the university’s need to correct Sprinkle’s earlier message, saying the correction was not in any way affirming.

Well… yeah. I’m not sure why they’re surprised to learn that bigots are bigoting. Conservative Christianity teaches everyone to look down upon LGBTQ people if they dare to embrace that identity. Trans people don’t exist in their theology. Gay people must remain celibate if they want to stay in God’s good graces.

Sprinkle’s message was in no way pro-LGBTQ. The graduates were fine with that for some reason. But the school’s leaders flipped out because it wasn’t explicitly anti-LGBTQ and the graduates think that’s somehow going too far.

I agree with the graduates that the university is not a safe space for LGBTQ students. But why would it ever be? The Church of God isn’t a welcoming place for them either. Unless you’re entering the school with no awareness of its conservative Christian doctrine, you shouldn’t be surprised when the lack of bigotry is seen as a problem for a speaker. 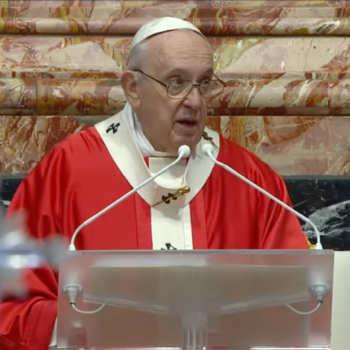 March 29, 2021
Pope Francis: The Devil is to Blame for COVID-Related Distrust and Desperation
Next Post