COVID-Denying Christian Pastor: Our Nation is “Being Run by a Bunch of Pussies” March 3, 2021 Hemant Mehta

COVID-Denying Christian Pastor: Our Nation is “Being Run by a Bunch of Pussies”

During a recent men-only “Warrior Night” at Elevate Life Church in Frisco, Texas, Pastor Keith Craft mocked the idea of wearing masks and told the Christian crowd that the country was bring run by “pussies”… whose crime, I guess, is taking scientists seriously.

Dressed like a WWE wrestler, pastor Keith Craft of Elevate Life Church in Frisco, Texas rants against wearing masks, screams that he’s not afraid of COVID and says, “Our country is being run by a bunch of pussies!” h/t @Bbizzle pic.twitter.com/i0MqwiAHPp

[In a mocking tone] “Yeah, in fact, we’re encouraging you to double up [with masks].”

I said that is not going to happen.

What?! We live in such a fear and mongering [sic] control and manipulation society that some of y’all have drank it like Kool-Aid, and I’m just here to tell you we are the sons of God in the Earth, and guess what? We’re not afraid! We’re not afraid!

And our country is being run by a bunch of pussies! That’s the only way I can say it! So record that and send that.

Those are the words of a man who doesn’t understand science but thinks mocking scientists (with the word “pussies,” no less) is the height of confident Christianity. He doesn’t care that more than 513,000 Americans have died of COVID, many of them because they interacted with conservatives like him who refused to take sensible precautions against spreading the disease. He thinks being macho — and wearing whatever the hell that getup is supposed to be — grants Christians immunity against the virus.

If this is your idea of Christian manhood, you’re pathetic.

And if calling people “pussies” is the only way you know how to tell people a lie, maybe a job that requires public speaking skills isn’t right for you. What a joke this guy is.

Imagine how weak you have to be to think Keith Craft represents strength. 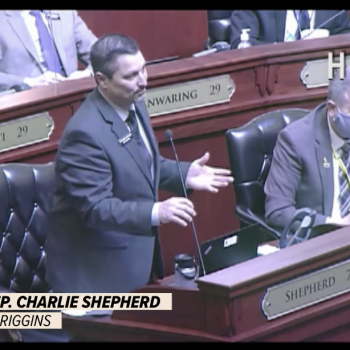 March 3, 2021 ID Lawmaker Rejects Child Education Bill Since Moms Might "Come Out of the Home"
Browse Our Archives
What Are Your Thoughts?leave a comment