During a sermon he delivered on February 21 — which has since been deleted from the church’s website and YouTube/Vimeo — Clark gave a sermon on how to keep your marriage strong.

His answers? The wife needs to look hot — like Melania Trump, preferably — and that means losing weight and submitting to her husband’s sexual desires at all times. Or else it’s all her fault when he strays.

This compilation below is already cringe-worthy, but I suspect some viewers might have a more visceral reaction to the kind of abusive, misogynistic messages he’s sending to women. Fair warning. (A longer version is here.)

So, okay, why is it so many times that women, after they get married, let themselves go? Why is that? Why do they do that?…

Now look, I’m not saying every woman can be the epic, the epic trophy wife of all time, like Melania Trump — I’m not saying that at all. Most women can’t be trophy wives, but, you know, like her — maybe you’re a participation trophy. I don’t know. But all I can say is not everybody looks like that! Amen?! But you don’t need to look like a butch either!

But you say, “How can I do that?” Oh, I’m so glad you asked that question! I’m so glad you asked that question! Because you’re in my office, you and your husband, and we’re talking about your marriage, and you’ve asked me this question about “What can I do about that?” All right, if you were sitting in my office, here’s the first thing I’d say to you — and boy, I hate to say this, this is why I don’t do marital counseling anymore — and that is… weight control.

So how important is this? Let me tell you something: I have a friend. He has put a “divorce weight” on his wife! That’s how important this is!

You know, makeup! Makeup is a good thing. You know, my little boy said, “Why do girls wear makeup and perfume?” You say “Because they’re ugly and they stink.” You don’t want to be ugly and stink!

Scientists have discovered, by the way, a food that diminishes the woman’s sex drive. It’s called the wedding cake. Hahahahahahahaha, yeah.

I can’t go through all the problems with his thinking here because it’s just… a lot. But it’s disturbing that not a single staffer at this church who knew what he was going to talk about talked him out of it. Like I said, the video is no longer on the church’s website, but there’s no explanation for that deletion either. It’s like they just hope no one will notice. (Oops.)

The fact that he doesn’t realize those things aren’t universal is (ahem) telling.

This kind of mentality, as many Christians and former Christians would tell you, is groundwork for abuse. It puts all the weight of a marriage on one person and provides a scapegoat for anything that goes wrong. Whether he implied it or not, there’s no set of rules a husband has to follow that’s in any way the equivalent of what he’s telling women. And the fact that this conversation has been occurring within Christian circles for years now — and still never made its way to this particular church — is an indication of the bubble these people live in.

When reached for comment, General Baptist Ministries, the umbrella organization overseeing this place, issued a pathetic statement without even explaining why they were saying it. If you didn’t read everything I just posted, you’d have no clue what they’re talking about.

General Baptists believe that every woman was created in the image of God, and they should be valued for that reason. Furthermore, we believe that all individuals regardless of any other factors are so loved by God that Christ died for them.

Each General Baptist church has autonomy from the national organization, and as a result General Baptist Ministries does not have authority related to the employment of any pastor or church leader in a local congregation.

That’s vague as hell. It suggests they don’t take any of this very seriously. It also implies nothing’s going to happen to Pastor Clark because it’s just not their business. Also, the response from women online is none of their concern. It’s the theological version of ¯\_(ツ)_/¯

Still, it’s more than what Clark and his church have done. Neither of them have issued any kind of public statement regarding the sermon. If he apologized, it’s certainly not obvious.

By the way, I’ve seen a number of comments online focusing on his looks — like he’s one to talk. None of that is very helpful because it doesn’t matter who’s delivering this sermon or what they look like. It’s awful no matter what. Focus on the ugliness of the words, not the person delivering them. That’s all. 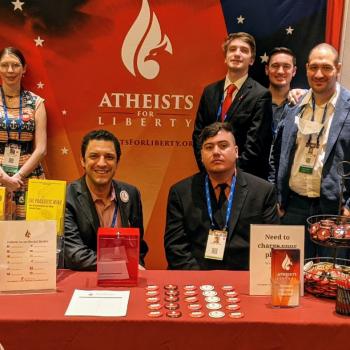 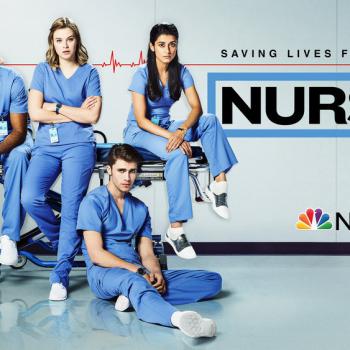 March 1, 2021 Called Out for Anti-Semitic Stereotypes, TV Show "Nurses" Pulls Episode Off Air
Browse Our Archives
What Are Your Thoughts?leave a comment