I missed this when it happened last week, but since I can’t stop thinking about it, you now get to hear about it too.

Randy and Kelli Ayres are the senior pastors at Cross Mountain Church in San Antonio, Texas. They have three sons, one of whom is married. And that daughter-in-law Ashley Marie Ayres posted a video on social media recently denouncing the church for focusing so damn much on Black people, social justice, and racial inequality.

You’re going to feel dirty after watching this. The white privilege is just blinding. You’ve been warned.

Pastor’s Christian White daughter-in-law Ashley Marie Ayres is tired of Black History Month, Breonna Taylor, and George Floyd. Could this be the way the whole 1st family talks about their black staff and worship leader over there at Cross Mountain Church in San Antonio TX? pic.twitter.com/u4eKgfkvVk

… where everybody is saying, “Oh my God, Breanna [sic] Taylor, oh my God, that guy with the big nose” — I don’t remember his name — but it’s just, like, stuff that is, like, going on in the world that’s important but it shouldn’t be highlighted on Sunday mornings here.

But that is… after all the riots and stuff, we had to do that panel where we brought Black families up and have them talk and, like, had a whole Sunday dedicated to Black people. The 21st is gonna be dedicated to Black History Month, which is fine, but it’s, like, it’s a lot. And I don’t even post that much about baptism! Why am I going to post that much about Black people? Like, that doesn’t even make sense.

… I’m not, like, racist. I know I’m not racist. But having the Black people on our staff that have milked being Black, and Black Lives Matter, and we need to put Black people on stage, and we need to acknowledge Black people, and we need Martin Luther King Day off because we’re Black, and if you get Columbus Day off, and, like, just all of that, it’s, like, I’m not racist but when you take advantage of being Black because you’re the only Black staff member, or the first Black staff member, it just drives me insane because our church is 99% white.

So if I post three times this week about Black History Month, which is more than I post about anything, people are going to be so annoyed. Like, nobody freaking cares.

And that, ladies and gentlemen, is how you can be racist without ever once uttering a specific racial slur.

Maybe the most telling line in that whole rant was “I’m not racist but.”

Since that video went up, the Ayres have been in damage control mode. Last week, they apologized on behalf of their family — though, to be fair, there’s no reason to think they deserve the blame for what she said. Unless you count their son’s taste in women, which I’m certainly calling into question.

I’m also wondering how many of the family members knew about her beliefs before last week and either ignored them, accepted them, or just assumed she’d never say this shit out loud.

After saying Ashley’s words didn’t represent him, his wife, or the church, he added that he would deal with this internally:

I am addressing specifics with my family. Of course I do not condone or approve of all of their actions and words. But I can love them in the same way Jesus loves me, even with all of my faults. And I can lead them toward understanding, reconciliation, and change.

Good luck with that. Should make for some fun extended family dinners in the future…

I’m not blaming the Ayres for what their daughter-in-law said. But I think it’s fair to blame the church culture she grew up in, where discussing racial justice feels like a special event for which there need to be limits instead of a foundational problem that never goes away. Whatever she thinks about race, she posted a video where she said horrible things under the assumption that everyone watching would understand her criticism and sympathize.

If this is what she says in public — or even on social media under a private profile — imagine what she’d say in front of people who aren’t strangers.

Don’t give the Ayres total credit for their response, though. They quietly removed the part of their church’s website that lists the staff. Perhaps they were trying to hide the fact that Ashley Ayres works as the church’s Director of Communications.

Makes sense. She certainly has a gift for going viral.

Removing the staff page also helps hide the fact that most of the employees are indeed white.

It’s not clear what the church is going to do moving forward. The message of their events obviously weren’t getting through to everyone in the “99% white” congregation. While a family may want to handle this privately, a pastor whose church is now synonymous with racism ought to do much more publicly.

(Thanks to Andy for the link) 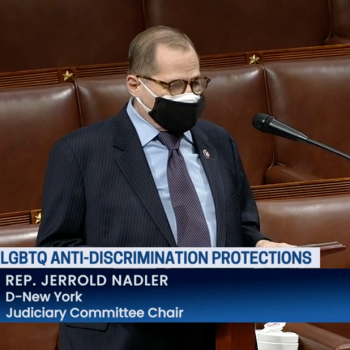 February 27, 2021 Republicans Are Twisting a Congressman's Defense of Church/State Separation
Browse Our Archives
What Are Your Thoughts?leave a comment