Since he was first elected in 2012, Pennsylvania State Rep. Brian Sims has been one of the most outspoken progressives in elected office. He’s openly gay, openly atheist, and never afraid to pick a fight with conservatives who want to use their power to hurt people.

And now he’s running for Lt. Governor of the state. He formally announced his candidacy this morning:

After 10 years in the State House, I’ve taken the lessons that my parents taught me & reinforced them in my work as a legislator: to take responsibility, commit to service, be courageous, & push for fairness.

I’m ready to take these values to lead the Commonwealth. pic.twitter.com/lcNmYQghgr

If elected, he would become one of the highest-ranking openly atheist officials in the country — and the only one in statewide office.

It won’t be easy though. Sims has created a decade’s worth of fodder for his critics. Then again, those are the same reasons progressives love him.

When defending abortion rights, he said to his colleagues, “Each of us put our hand on the Bible and swore to uphold the Constitution. We did not place our hands on the Constitution and swear to uphold the Bible.” (That line has been used by others before.) In fact, he’s repeatedly called out the hypocrisy of the “pro-life” crowd in memorable ways (sometimes going too far).

Still, just listen to this 2016 speech against a law that would ban abortions after 20 weeks for a taste of his pro-choice rhetoric. It’s inspiring to hear any legislator talk like this.

He also welcomed Mike Pence to his state in 2018 with a one-finger salute:

OFFICIAL WELCOME: Vice President Mike Pence let me be the first person to officially welcome you to the City of Brotherly Love, and to my District in the State House!

To be clear, we’re a City of soaring diversity. We believe in the power of all people to live and to contribute: Black, Brown, Queer, Trans, Atheist, Immigrant, we want you and we’ll respect you.

So keep that in mind while you’re here raising money to attack more families, spread more lies, blaspheme with your bible, and maybe even talk to a woman without your wife in the room. We have plenty of them, and they’re pretty much all more powerful and more real than you have ever been.

So…get bent, then get out!

It wasn’t just a symbolic finger, either. It served a purpose. If people were more upset by his hand gesture than the actual crimes and cruelty committed by the Trump administration, then it showed how they were part of the problem.

And, of course, in addition to being the first openly gay person elected to the Pennsylvania legislature, Sims has routinely criticized religious conservatives and faith-based hypocrisy. In 2014, he told Religion News Service he didn’t use any particular religious label and that his “faith is in humanity,” though he has since used the word “atheist” to describe himself on multiple occasions. In 2018, the Secular Coalition for America gave him their National Visibility Award.

In a state where he’s always been in the legislative minority — in large part due to GOP gerrymandering — but where Democrats have done well across the state in recent years, running for Lieutenant Governor makes sense as a next step. Current Lt. Gov. John Fetterman, who is also outspoken and (mostly) progressive, has announced his candidacy for U.S. Senate.

Sims should have no problem generating enthusiasm, funds, and volunteers. Maybe one upside to being a lightning rod for culture war criticism over the years is that it’s all out there in the public. Conservatives have spent years trying to make him into an enemy and he’s almost always been able to deflect it and grow stronger. He’s never been shy about expressing himself which makes it that much harder for Republicans to turn him into a caricature. Not that they won’t try.

You can donate to Sims’ campaign right here. 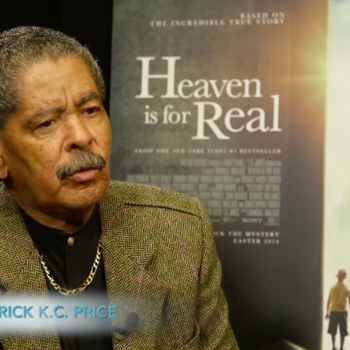 February 15, 2021
Preacher Who Said Marriage Equality Would "Jeopardize" the Future Dies of COVID
Next Post