Last week, Pennsylvania State Rep. Brian Sims went to a local Planned Parenthood and confronted some of the protesters outside by asking them questions with his camera turned on. Was it aggressive? Yeah. Was it worse than what those protesters were doing to patients trying to enter the clinic? Not a chance. He confronted the protesters about their “pro-life” hypocrisy while they pretended to be victims in order to go back to harassing women.

Conservatives have been furious with Sims over the confrontations, and some have even demanded his resignation. Anything to take the heat off of their own actions and put the spotlight on a proud progressive who’s also openly gay.

The Catholic League-of-one’s Bill Donohue is no exception. Naturally, he took things even further, accusing Sims of doing something even worse than sexual misconduct and calling for a criminal probe. (Even though Sims didn’t do anything illegal.)

… we are now upping the ante, asking PA House members to support Pennsylvania State Republican Chairman Val DiGiorgio in his quest for a criminal probe. I am also writing to Philadelphia D.A. Larry Krasner asking him to launch a criminal investigation of Sims; such a probe is currently under review.

U.S. Senator Al Franken was driven from office after revelations of sexual misconduct. What Sims did was worse. Franken’s offenses took place before he was elected to the Senate — Sims committed his offenses while in office. Justice demands that no public official be permitted to get away with such obscene conduct.

“Obscene” is getting in the way of a patient and her doctor because you think a fertilized egg is more important than she is. Pointing out the lack of logic in that position, as Sims did, isn’t obscene or criminal.

Donohue also says Sims violated “the Constitutional rights of four females, placing all of them in danger.” Not only were those women still allowed to protest, they were never in any danger. Danger is what doctors deal with when they get death threats from “pro-life” Christians.

Again, it’s not surprising that Donohue would minimize sexual misconduct. He also minimizes child rape at the hands of Catholic priests. He’s the sort of person who looks for any excuse to denounce a liberal politician for defending women’s rights. When one does it in a provocative way, he’s ready to pounce in a way he would never do when it comes to abuse within his own Church. 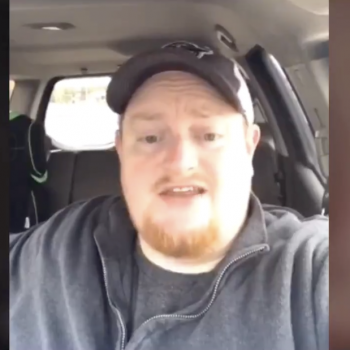 May 9, 2019
This Christian Claims No One Said "Merry Christmas" at Drive-Thrus Under Obama
Next Post