A fourth-year journalism student at Toronto’s Ryerson University has filed a complaint with the Human Rights Tribunal of Ontario, saying that he was dismissed from the student newspaper for his strict Catholic beliefs.

At only 22 years of age, Jonathan Bradley has managed to set up the beginnings of a potentially lucrative career in journalism, writing for conservative publications like the National Post and the Post Millennial at the same time as he volunteered as a columnist for Ryerson’s independent student paper, The Eyeopener. 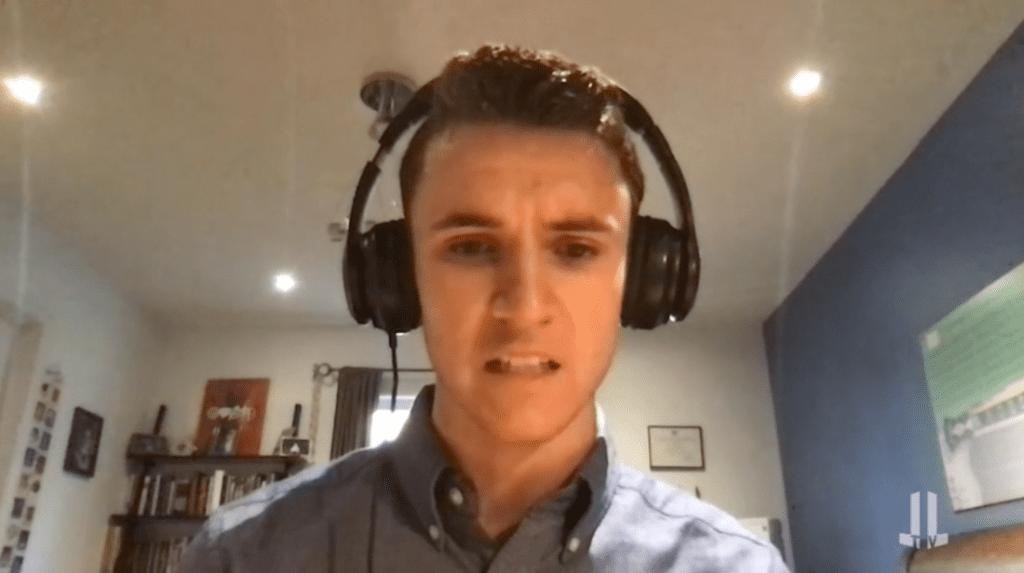 Some of Bradley’s recent Post Millennial columns have taken direct aim at trans people. He issued a long complaint about a public health tweet that used the phrase “pregnant people” instead of “pregnant women,” and he commented on trans women in sport in an article that misgendered them as “gender-nonconforming biological males.”

But the article that kicked off this firestorm was published in March of 2020. It called for all Canadian universities to remove equity, diversity, and inclusion offices from their administrations; Bradley said he “noticed that some groups were being discriminated against by these offices on the basis of their viewpoints” opposing inclusion and equity.

After that happened, he says, then-editor Sarah Krichel explicitly excluded him from staff gatherings and banned from writing on certain topics. So reports Lindsey Shepherd, a free-speech grifter in her own right:

Krichel pulled Bradley aside at a staff dinner and told him his Post Millennial article could make other Eyeopener staff members feel “triggered” or “uncomfortable.” Krichel told Bradley that he would not be permitted to write about diversity and inclusion issues for the Eyeopener, and that if he were to write about those issues in another forum, he would be disinvited from the staff pub night that week because his presence could make his colleagues feel unsafe.

Yes, it turns out that freedom of speech is not freedom from consequences, and also that many LGBTQ people feel unsafe and uncomfortable around somebody who publicly argues in favor of treating them as second-class citizens.

(If Shepherd’s name sounds familiar, you’ve been paying attention to the academic freedom debate in Canada. Shepherd made a name for herself in reactionary circles after the University of Waterloo disciplined her for showing students an anti-trans clip during her time as a teaching assistant… a decision that we can fairly assume, given her later actions, was motivated by her own anti-trans animus. It seems grifters of a feather will grift together.)

Months later, in early June, an unnamed former classmate posted screenshots of a direct message discussion she’d had with Bradley, in which he decried the sinfulness of homosexuality and “transgenderism.” The student says she “called him out publicly and messaged him privately” after he publicly called homosexuality a sin.

Bradley claims she libeled him… but given that she showed receipts, and based on his own current oeuvre, that’s an unlikely story. It’s not libel if it’s true.

Days later, The Eyeopener‘s editor-in-chief Catherine Abes sent Bradley an e-mail telling him that she could not run the newspaper in a way that respected LGBTQ people while keeping him on staff:

You are entitled to your opinion and are free to express it online; The Eyeopener cannot and would not control that. However, we are responsible for ensuring that our Eye community — including sources, contributors, readers, and editors — feel safe and comfortable in working with The Eyeopener and coming into our space. I fear that since you’ve made your opinion public, members of our community, especially queer, trans, and non-binary folks, would no longer feel safe if you are associated with the publication.

It’s for these reasons that I’ve come to the decision that you can no longer contribute to The Eyeopener. It is no longer enough to ask that you do not pitch equity-based stories or communities stories. There will be queer, trans, and non-binary voices in every kind of story and I must protect these folks’ interests and ensure they feel safe.

I’ll say it again: freedom of speech is not freedom from consequences. Bradley’s opinions are not neutral, and his presence on staff would inevitably drive queer voices out. Abes made the right choice in prioritizing marginalized voices over the bigoted status-quo.

But Bradley’s lawyer, Carol Crosson, doesn’t want the courts to see it that way, because then her client has no case. So she’s framing it as a referendum on the right to private conversations:

If we in society are punished for conversation between individuals in our workplace, that’s a slippery slope that we dare not approach. The right to free speech in society, and to disseminate our beliefs, is crucial. It’s crucial for a functioning democracy. Should it be that individuals are punished for their conversations, that really goes against the foundational freedoms that we have in society. It puts a chill on speech, even past speech.

Note the bait-and-switch here. Bradley wasn’t being punished solely for a private conversation; he’s been very public about his anti-LGBTQ opinions on social media and in his work for conservative outlets.

And he wasn’t removed from his position for his religious beliefs. He was removed for openly promoting hate and hostility against a group of people that includes some of his colleagues and classmates.

Human rights protections based on creed say workers can’t be fired for engaging in private religious acts like saying daily prayers or celebrating non-Christian holidays. They don’t protect behavior that would get you fired whether or not it was a secular offense, like creating a hostile work environment for LGBTQ people.

In spite of the events that took place at the Eyeopener and the possibility that his presence would make participation unsafe for queer and trans journalists and students, the Ryersonian has selected him for a position as a “breaking news reporter.” They’ve missed the point… and in doing so, they’ve damaged their credibility as a voice for the entire student community, which includes LGBTQ students.

As for the former classmate who outed him as a bigot, Bradley seems pretty proud of how he handled that situation:

I went after her in a defamation suit. I hired a defamation lawyer. And it was kind of funny because we served her with the notice of libel and the demand letter, and literally in a few hours she deleted the defamatory tweets. And then a few weeks later, we received an apology from her.

He seems to think this proves he was correct about the whole situation, but it’s probably a lot more likely that she was intimidated by the prospect of an expensive legal fight she couldn’t afford.

Way to fight for freedom of speech there, Jonathan.

(Screenshot via Rumble. Thanks to Murray for the link)

February 5, 2021
E.W. Jackson: The "Friendly Atheist," Whoever He Is, Secretly Fears Almighty God
Next Post