E.W. Jackson: The “Friendly Atheist,” Whoever He Is, Secretly Fears Almighty God

Right-wing radio host and former candidate for Lt. Governor of Virginia E.W. Jackson, who said earlier this week that gay and trans people couldn’t get to Heaven, knows that I wrote about him.

That’s because he opened his Bible study Thursday morning with a dig at me, suggesting I only got mad at what he said because I know in my heart that God exists.

I got one of these alerts that the Friendly Atheist monitored the program yesterday and got very upset. Here’s what they said about me. This is by — the writer is Hemant Mehta. And what he said about me is — I don’t know who Hemant Mehta is, and I’m sure you don’t either — “Right Wing radio host and former candidate for Lieutenant Governor of Virginia, E.W. Jackson, who recently said Jon Ossoff and Reverend Raphael Warnock were demonically possessed” — and they are — “spent part of his livestreamed Bible study yesterday trashing LGBTQ people. Besides claiming gay and trans people couldn’t get to Heaven — a belief that even many conservative evangelicals and Catholics oppose — Jackson also condemned Dr. Rachel Levine, a trans woman and pediatrician selected by President Joe Biden to be the assistant health secretary.”

Here’s point number one: Why would the Friendly Atheist care about whether LGBT people — LGBTQ, whatever the initials are — can go to Heaven? THEY’RE ATHEISTS! And they’re writing to criticize me for saying… that certain people will not go to Heaven. How does that work? Why are they even concerned?

I don’t know whether to smirk at the cheap dig at my expense, thank him for acknowledging that atheists do indeed have hearts, or try and educate him about how atheists don’t secretly believe in God.

If it matters, I don’t think LGBTQ people will go to Heaven for the same reason no one’s going there: It doesn’t exist. I called it out because it shows the cruelty of conservative Christians. They spend their lives on Earth discriminating against LGBTQ people, and then they insist that LGBTQ people aren’t allowed in their afterlife fantasy world either. It’s fictional exclusion! (As if actual discrimination isn’t enough…) It’s also an indication that Christians who say “love the sinner, hate the sin” are liars. They don’t care about the “sinners.” Jackson has already made up his mind about Levine without knowing anything about her beyond what she looks like.

As anyone who’s ever read this website knows, the best way to get people to abandon their religious beliefs is to show religious people speaking for themselves.

I don’t harbor a secret fear of God. But E.W. Jackson is undoubtedly creating a bunch of atheists. 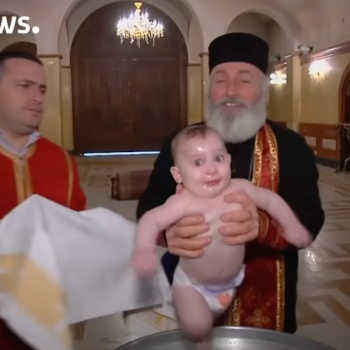 February 5, 2021
A Baby Died Because the Romanian Orthodox Church Has an Insane Baptism Ritual
Next Post 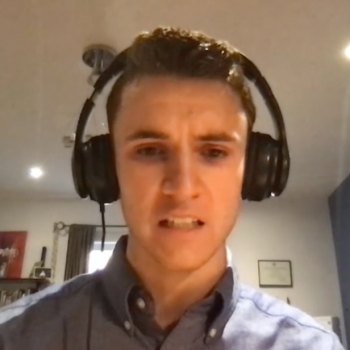