Scott Lively: Kamala Harris Reminds Me of the Whore of Babylon and Jezebel February 4, 2021 Beth Stoneburner

Scott Lively: Kamala Harris Reminds Me of the Whore of Babylon and Jezebel

Anti-LGBTQ activist Scott Lively — the man who inspired Uganda’s infamous “Kill the Gays” bill — took a break from his usual homophobia this week to spend some time with his sexism.

Rather than just calling her a “Jezebel,” he tacked on a reference to the “whore of Babylon.”

“I haven’t really done any deep analysis of this but, having Kamala Harris sort of being the heir apparent to the failing Joe Biden, all of the biblical references to the Whore of Babylon and the Jezebel that plays such a huge, huge role in the Last Days prophecy, all sort of rise to the surface,” Lively said. “Considering her background, how she got to where she is, not hiding it, just the implications of that.”

Are we supposed to know what “her background” means? She’s a former prosecutor. A state attorney general. A senator. She’s a woman who’s broken multiple glass ceilings — and that’s before she became Vice President. This, Lively says, reminds him of a rebel and a whore.

“The Antichrist is whoever the demon Satan is in possession of at any given time,” he said later in the program. “And I think that more than anyone, [Barack] Obama actually fits the Antichrist model today. I’m not saying that he is for sure, but he more than anyone else that I’ve ever seen does fit the model.”

He says that like he wants credit for saying he’s not 100% sure Obama is the Antichrist. Just, like, 99% sure.

In any case, the Antichrist described in the Bible is someone who will actually be well-liked. So while that may apply to Obama, who is generally respected by the Left, it also applies to Donald Trump, whom the Right still fawns over (and history is already pretty clear about which president did more damage).

These people really need to get more creative with their insults. 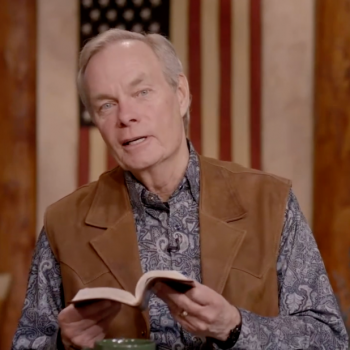 February 4, 2021
Preacher Andrew Wommack: I Prayed Away the Mildew in My Home
Next Post

February 4, 2021 Christian “Prophetess”: A Talking Scroll in Heaven Says Trump is Still President
Browse Our Archives
What Are Your Thoughts?leave a comment