The DNA of Jesus? Polish Catholic Church Wins Converts With a Ghoulish “Miracle.”

A Catholic church in Legnica in southwest Poland may have obtained the DNA of Jesus after seeding a consecrated host in an improvised petri dish and growing it into a divine muscle. And if you think that’s absurd… have you met my friend religion?

First, let me just say this: If I found what I thought was blood and human tissue in a bagel, I’d probably call the police first, and the FDA next. But if you’re a Catholic and you discover the same substances in a holy wafer — happy times!

In a slip-up on Christmas Day 2013, a consecrated host fell on the floor of Father Andrzej Ziombra‘s church. The tragedy caused a “great pain” in his heart. You and I would throw the foul thing out (the wafer, not the heart) if it was too late to apply the five-second rule, but remember, this is the actual body of Christ we’re talking about, at least if you’re a Catholic.

Church rules say that a fallen host ought to be reverently picked up and consumed, though apparently it’s also permissible to place the item in a dish of water until it dissolves. Then the liquid must be emptied in the sacrarium, a special basin in a room next to the sanctuary that has a drain directly into the ground. Clearly, you don’t want to flush the savior down the sewer. That’s dangerous.

Ziombra chose the second option, at least initially. He retrieved the schmutzy wafer and and put it in a container with regular H2O. At some point,

… red stains appeared on the host, according to Ziombra.

But Father Ziombra remains a Believer, of course. Here’s the remarkable thing about his host, he says: After a while, it spawned something (and apparently it wasn’t “more fungus”).

The local bishop at the time, Bishop Stefan Cichy, commissioned a scientific study of the Host. In February 2014, a small fragment was placed on a corporal [a holy cloth, TF] and underwent forensic testing by two university medical departments. “In a detailed, histopathological research, under a microscope, a fragment of the heart muscle in agony was found,” Ziombra told EWTN News.

“A fragment of the DNA sequence was found, but to tell whose DNA it could be, it still needs further research,” the Polish priest explained,

… six and a half years after the miracle occurred.

I await the results with bated breath. If human tissue can be generated from flour, water, and yeast, surely such a breakthrough will be published and shared with the worldwide scientific community… soon.

The Vatican Congregation for the Doctrine of Faith approved veneration of the Host in Legnica in 2016. But the Church continues to monitor studies and examine whether the alleged miracle will bear spiritual fruit. …

I bet he and his collection plate never saw that coming.

The host in question is displayed in a reliquary in the priests’s church. For years now,

“People from all over the world [have been] making their pilgrimage to Legnica,” he said before the coronavirus pandemic impeded travel. “For me, [it] was a kind of an absolute surprise, because, for example, there were pilgrimages from countries in far Asia, or even from North America, from such countries that people had to travel many thousands of kilometers to this place.

All this is also a signal for me, a confirmation that God sent this impulse to the whole world, so that the whole world would meditate on the Eucharistic miracle in Legnica and ask: ‘What is God going to tell me through this sign?’” he said.

The “heart-muscle host” has turned at least one local unbeliever into a convinced Catholic, says Ziombra happily.

There was a man in his community who he said had been “hostile to the Church all of his life, and even fought against it. … God converted him. … And after 50 years he went to his first holy confession, the first Holy Communion. And indeed he radically changed his life, his attitude to God, he became a very ardent believer.”

Ziombra said that he has documented other similar “sudden conversions” in the lives of people who prayed at Legnica, and would pass this information along to the Vatican.

This isn’t even the first time that a dropped host supposedly grew into a biological muscle inside a Polish Catholic church. Here’s a 2008 case that’s identical to the “miracle” in Legnica in almost every way.

That Christ’s heart muscle can spontaneously develop inside a single consecrated wafer is an exciting development, raising the possibility that if you dump a family-sized bag of hosts into a hot tub, Jesus might return fully formed from his 1,987-year-long vacation.

Best keep a towel, a loincloth, and an English-Aramaic dictionary ready.

P.S.: One of the links I checked out was supposed to lead to an article at spiritdaily.net about a holy wafer in Dallas that developed the familiar red fungus. The page wouldn’t load, and I realized after 15 to 20 seconds that there was a message at the bottom of my browser window that said 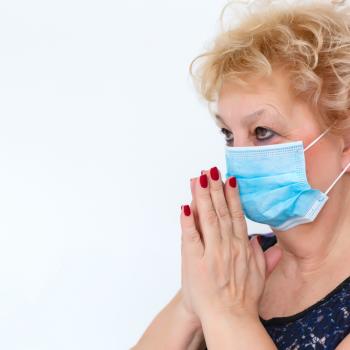