Dave Daubenmire: The “Activist Mommy” is Telling “Half-Truths” About Her Divorce

Late last week, Elizabeth Johnston (a.k.a. the “Activist Mommy”), the homeschooling Christian mother of 10 who hates sex education, drag queens, and LGBTQ people, announced that she’s getting a divorce.

She claimed her husband, anti-choice activist Dr. Patrick Johnston, had been “repeatedly unfaithful to me, as well as psychologically and emotionally abusive” over the course of 22 years. (He has not yet spoken publicly about any of this.)

I’ll say now what I said then: It’s not anyone else’s business. If she felt the relationship needed to end, then I’m glad she decided to do that. It would be a hell of a lot easier to show compassion for her, though, if she wasn’t always such a vile human being online.

But you know who’s really angry about her post?

Fellow Christian hater Dave Daubenmire, who spent a chunk of his show Wednesday railing against Johnston for airing her dirty laundry in public. He said her post isn’t accurate (since he knows the couple well) but hesitated to tell the world more of her secrets.

Just break out the popcorn and watch a few minutes of this bigot-on-bigot fight.

It’s too long for a useful transcript, but there are moments when he says “I’m just gonna tell you: this is full of half-truths,” and “no marriage falls apart because of the failings of one partner,” and that he refuses to “allow [Patrick Johnston’s] reputation to be besmirched.” He’s especially angry that, if her marriage was failing for so long, that she had the audacity to pretend otherwise while traveling and speaking in public.

Then there are repeated mentions of alleged sexual assaulter Brett Kavanaugh and alleged child molester Roy Moore, as if Johnston is falsely accused. (Maybe not the best examples to use…)

It’s hard to take Daubenmire seriously given his own history of deranged statements. But at least for a few minutes, we can enjoy one horrible person being mad at another horrible person for being improperly horrible. 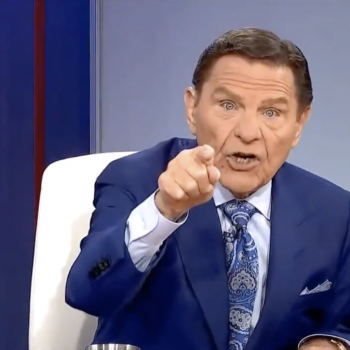 March 20, 2020 Podcast Ep. 314: Scamvangelists Still Want Your Cash in a Pandemic
Browse Our Archives
What Are Your Thoughts?leave a comment