A fight in Florida between two brothers, fueled by alcohol, led to the firing of gunshots and one of the men getting arrested and charged with aggravated assault with a deadly weapon.

What caused the fight? The Bible.

When deputies first arrived on scene, [Michael] Dean’s brother told them they drank several alcoholic beverages on the front porch and were in a heated debate about the Bible, the affidavit said. The brother then told deputies Dean choked him, but he broke out of it and a fight started.

When the short fight ended, Dean walked off the front porch, stood in the front yard and pulled out a handgun. According to the affidavit, Dean told his brother to leave the residence. He then told him if he stepped off the porch, he would kill him.

Thankfully no one was hurt. But the WCTV article about this incident fails to answer the most obvious question about the fight: What the hell were they arguing about?

The contradictions between Genesis 1 and 2?

The way the Gospels contradict each other?

Why everyone at the Last Supper was seated on the same side of the table?

Who knows. But feel free to make your guesses in the comments.

(Thanks to @BchandSciLuv for the link) 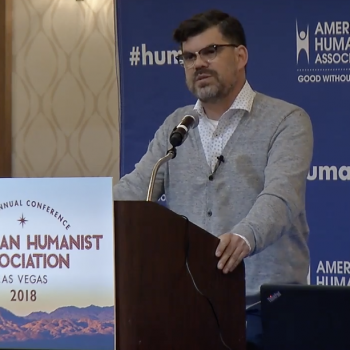 October 29, 2019
Former Pastor: Those Who Leave Christianity Are "Not in Open Rebellion"
Next Post