For the past week, since the Freedom From Religion Foundation aired a commercial during the Democratic presidential debate featuring Ron Reagan saying he “not afraid of burning in Hell,” Pastor Greg Locke has been on a Twitter rampage against the whole idea of church/state separation.

That night alone, he tweeted that the ad was “further proof that this party HATES GOD”… suggesting that the Democratic Party had anything to do with the ad. (They did not.)

Locke, if you need a refresher, is the pastor who has said transgender people are “perverts,” that the sexual revolution leads to homosexuality and bestiality, that Planned Parenthood is really really evil, and allegedly abused his ex-wife. (He denies that last one.)

But of all the exchanges that occurred in response to that Reagan ad, this may have been the weirdest. Locke claimed the ad “LIED about our Founding Fathers” in that it said they wanted to keep church and state separate. Someone chimed in to ask for proof that FFRF lied.

And maybe I’ll sign it and send it back to you. At least then, it would have someone’s name in it that actually stands against your revisionist nonsense.

That would be Andrew Seidel, FFRF attorney and author of The Founding Myth: Why Christian Nationalism Is Un-American (i.e. an expert at this stuff), offering to send his book to Locke, and Locke saying he would send it back because he doesn’t need any stinking education.

I honestly thought that was the end of it.

But Andrew really did send Locke the book. It even included this inscription: 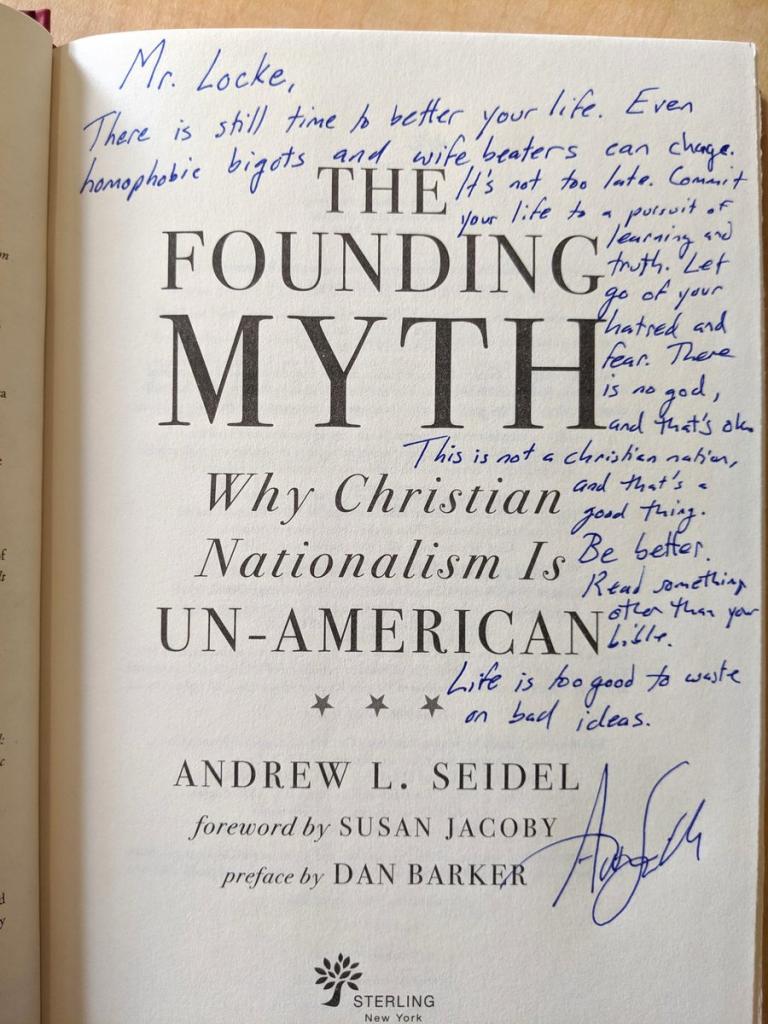 Locke apparent read it very quickly (more on that later) since he tweeted that “It’s a work of fiction for sure.”

Remember that trashy Ron Reagan commercial @FFRF put out last week? Well, their lawyer @AndrewLSeidel sent me his book. It’s a work of fiction for sure. I did a video for #NationalNutDay and it’s all about their atheistic nonsense. It’ll be up in a bit. Enjoy.

He also said he’d post a video about it. But it still wasn’t up “in a bit” as promised, and Andrew noticed.

That video finally went up yesterday. Instead of offering a rebuttal to anything Andrew wrote, the conservative Christian responded in the most stereotypical way imaginable: He burned the book.

The Freedom From Religion Foundation, or @FFRF is actually a massive religion. Their attorney @AndrewLSeidel decided to send me a book. I decided to, well….�#OneNationUnderGod �� pic.twitter.com/XfaXfsi93S

Locke’s “substance” includes standard apologetic tripe such as Atheism is a religion and Atheists have more faith than Christians! and But But But he’s WRONG!

He also delivered this pre-scripted line that you just know he thought was gold: “An atheist writing the history of America is like Planned Parenthood writing a manual on how to take care of infants.”

I don’t understand why he thinks that’s a mic drop line. In fact, plenty of atheists have written history books, and people who work for Planned Parenthood can be (and are) excellent mothers. Locke’s “slam dunk” just showed how little he understands the issues. Ultimately, he didn’t respond to a single point in the book and it’s fairly clear he didn’t even bother reading a single chapter.

He just took the approach that knowledge goes against everything he stands for and set the book on fire. 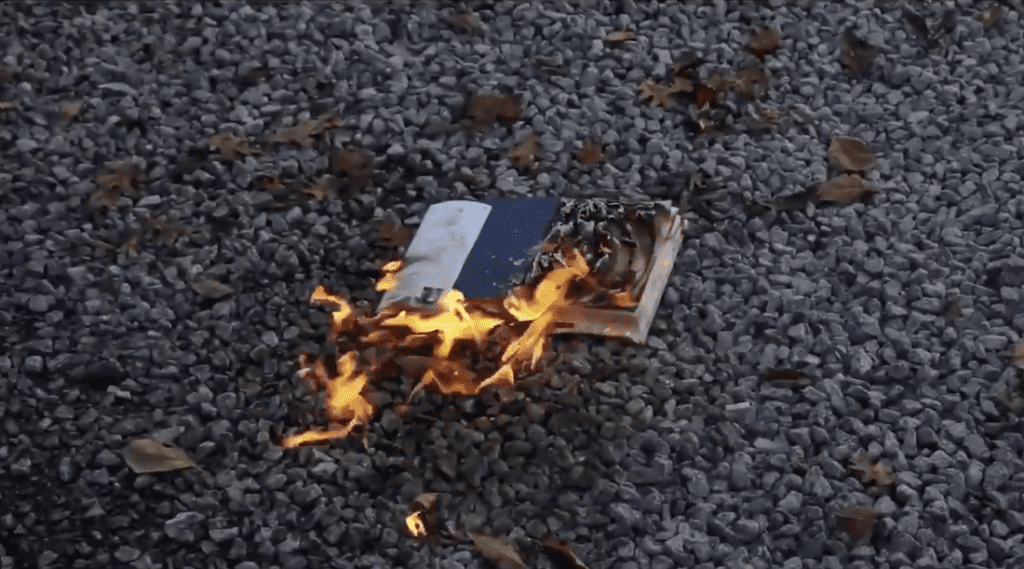 Who needs a white flag of surrender when a destroyed copy of a smart person’s book does the same job…?

It’s good publicity for Andrew, though. If you want to sell an academic book, it’s hard to market it better than “This book is so dangerous, some Christians want to burn it.”

I asked Andrew what he made of the video. He took it in stride:

I’m disappointed this preacher chose to burn my book, The Founding Myth, instead of read it. Locke fails to understand something that FDR explained some 80 years ago: “Books can not be killed by fire.” Those who burn books are incapable of dealing with the ideas in those books. Nazis, totalitarians, authoritarians, theocrats, and Christian Nationalists. Locke may have burned a copy of The Founding Myth, but really he admitted that he cannot comprehend the basic history and facts in the book. He wanted to project strength, but instead, he showed true weakness.

Here’s some irony for you: Andrew actually wrote in the book about how some Christians refuse to engage with forbidden knowledge and burn books as a way to avoid it.

[M]any sects, Christian or otherwise, have built-in safeguards to exclude new information and the outside world: persecuting outsiders, shunning doubters, encouraging intrafaith marriages, punishing apostates (sometimes with death), homeschooling or religious schooling, gathering together to shout down the doubts on at least a weekly basis, approving some texts and burning others.

Someone who read the book might have picked up on that…

I’ve met a number of atheists who have been handed copies of the Bible. They’re often proud to show me their copy — marked up, with contradictions highlighted and Post-it notes everywhere. They do that because they read it and they can show you all the problems with it. Compare that to Locke, who’s so disturbed by the book’s premise that he can’t ever bear the thought of anyone reading it and dealing with the material head-on. He certainly can’t.

Burning a book may get views on social media, but that’s what cowards do when confronted with alternative ideas. They don’t respond in kind. They just pretend the opposition doesn’t exist. They refuse to let any taboo thoughts pierce their religious bubble. 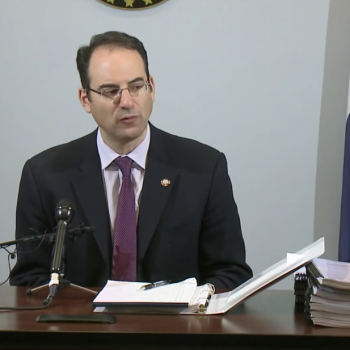 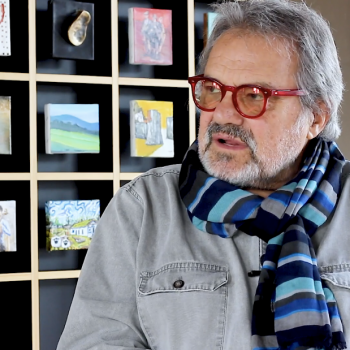