The Chino Valley Unified School District in California may have had the most irresponsible school board in the country.

For years, a majority of the board used their power to turn meetings into church services, full of explicitly Christian prayers and Bible verses and rants against gay marriage. Even after the Freedom From Religion Foundation filed a lawsuit over the matter, the board chose to defend themselves with a Christian legal group… apparently not realizing they would be on the hook for the other side’s legal fees if they lost the case.

Part of the reason the board kept fighting this case was because they had a promise from a local megachurch leader that the community would cover the legal bills. Pastor Jack Hibbs of Calvary Chapel Chino Hills, which two of the board members attend, made that promise in 2016:

At a special March 7, 2016 board meeting called for a vote to appeal the injunction, the board room overflowed with community members. Pastor Hibbs encouraged board members to stand firm.

“One of the things you’ve been tasked to do is to do the right thing,” he said. “The community is going to rise and create a war chest to help you.”

That wasn’t just rhetoric. Hibbs had previously urged his 10,000-member congregation to vote for some of those board members (directly violating the IRS rule that says pastors can’t tell their churches how to vote unless they want to give up their tax exemption). Those church members were part of a large horde encouraging the board to keep appealing the case.

Board member Andrew Cruz even said the legal fees weren’t a concern for him because “the Let Us Pray Foundation has committed to raising funds to cover costs associated with this lawsuit.” That foundation had a GoFundMe page that raised $143,745 for those efforts… so maybe he had a point. (One offline donation from an anonymous person was for $143,000.)

But now the fight is over. It’s time to pay the bills. And the school board hasn’t seen a dime from these Christian groups. (That GoFundMe page no longer exists.)

Community members are now asking why the school board is left to pay the bills when the megachurch urged the board to fight this battle with the promise of covering the losses.

[Chino Hills resident Lisa] Greathouse told the board May 16 “Over and over we heard this lawsuit wasn’t going to cost the district a dime. We heard it from board members, church officials and we even heard it from Chino Hills council member Art Bennett. My question is where is this money that was promised?”

She also said: “It seems the height of irresponsibility that these two board members [James Na and Andrew Cruz] put us in a position of being sued, and the height of hypocrisy that the people who vowed to pay for the lawsuit are nowhere to be found.”

The district’s PR director Imee Perius says the money was only promised if the board fought the case as far as it could possibly go. Because the board gave up before a costly Supreme Court appeal, the church isn’t going to give them anything.

James Na, one of those problematic board members, is saying the same thing, suggesting that the responsible board members who decided to focus on students instead of fighting for a Christian agenda are the real villains in all this.

Mr. Na said he doesn’t understand why the school board members chose not to continue the appeal to the Supreme Court as the [Christian] legal firm Tyler and Bursch had recommended.

“We had hundreds of thousands of dollars donated to cover all legal fees, and we would have been guaranteed more if we had stayed vigilant in protecting the freedom of speech given to us by the Constitution and continued our appeals to the Supreme Court,” wrote Mr. Na in the statement to the Champion.

It’s a pathetic excuse. The money they had raised so far didn’t cover the bill up to that point, and forcing FFRF to write their own Supreme Court brief would have increased those costs significantly — and remember: This was always a long shot since there was no controversy over the illegality of what the school board was doing. There’s virtually no chance the Supreme Court was going to take up this case because there was no legal ambiguity.

And now the church’s pastor and director aren’t answering questions or handing over the money.

That’s what you get for trusting Christians with theocratic goals. FFRF says that since the board members were sued in their official capacities, it’s the board — i.e. the taxpayers — who will be on the hook for their bill.

All because a few board members decided promoting their religion at meetings was more important than doing what was best for the children. 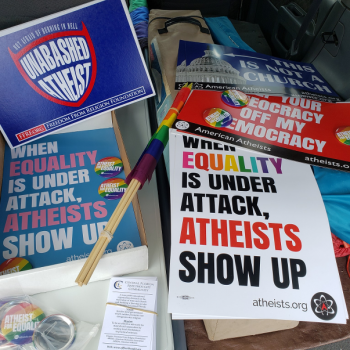 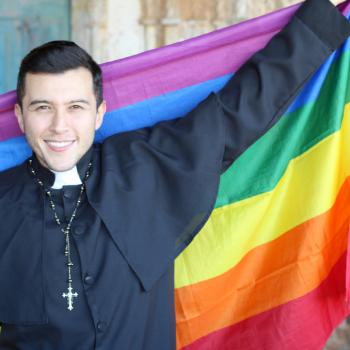 June 16, 2019 Practicing Catholics Should Think Twice Before Marching in Pride Parades
Browse Our Archives
What Are Your Thoughts?leave a comment