Rick Wiles: Eating Meatless Burgers Will Lead to “A Race of Soulless Creatures”

End Times broadcaster and anti-Semite Rick Wiles, last seen explaining how pro-choice people would be eternally aborted by demons in Hell, said on a recent episode of “TruNews” that meatless burgers are part of a Satanic plot to turn people away from God.

His logic — and I use that word very generously — is that a plant-based alternative to meat is subverting God’s Master Plan to have us eat His other creations. Therefore, if you’re eating these vegetarian patties, you’re actually rejecting God.

“God is an environmentalist,” Wiles continued. “He takes this very seriously. He created this planet, he created the universe and he’s watching these Luciferians destroy this planet, destroy the animal kingdom, destroy the plant kingdom, change human DNA. Why? They want to change human DNA so that you can’t be born again. That’s where they’re going with this, to change the DNA of humans so it will be impossible for a human to be born again. They want to create a race of soulless creatures on this planet.”

As a vegetarian, I was eager to try an “Impossible Burger,” but knowing that they’re leading to a godless soulless existence? Damn. It’s a twofer! I hope they don’t charge more for the bonuses. 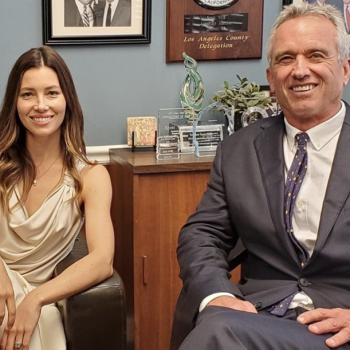