Humanist Delivers Invocation in AZ Senate: “Be the Curators of Inspiration”

Yesterday morning, Robert Peoples of the Affinis Humanity Coalition delivered a secular invocation before the Arizona State Senate as a guest of State Senator Andrea Dalessandro and the Secular Coalition for Arizona.

If you want to see how someone can be inspirational without talking about God, you have to check this out.

Thank you for the introduction and welcoming me, president and colleagues. And thank you, Secular Coalition of Arizona, for requesting me today.

Ladies and gentlemen, today, you will hear an invocation, not particularly as a man of faith but as a man of reason.

I am a Secular Humanist. Traditionally, you have been asked to bow your heads and pray. But today, I ask that you raise your heads and close your eyes. It is incumbent for this office to exude policy under the auspice of reason. The residents in our state of Arizona look upon this office as a guide for intellectual methodologies to resolve disparities.

In classical times, we’ve been asked to look above us for inspiration. But today, I ask that you look within and be the curators of inspiration.

Before systemic inequalities were attached to our ethnicities, we are human.

Before one gender inculcated sovereignty over another, we are human.

Before the sexual orientation of who we love mattered, we are human.

And before dogmatism sequestered our minds to be automatons in a free world, we are human.

Look into the recesses of your hearts and minds. Know that we are all part of the universality of existence. Our DNA consists of stardust, ten billion years old. Science discloses that we are the microcosm of the macrocosm.

Please open your eyes with me. Our eyes were closed not to [receive] the guidance from a divine artificer or the tenets of religiosity. But today our eyes were closed to excavate the catacombs of our humanistic moral fibers — empathy, love, and reason. All these attributes to be the barometer of just law.

Beautifully done, and as far as I can tell, there was no immediate backlash.

Hopefully, unlike what we saw in the AZ House in February, there won’t be some attempt by a Republican to “counter” that secular invocation with a religious response.

April 1, 2019
Please Support the Work I Do Through This Site
Next Post 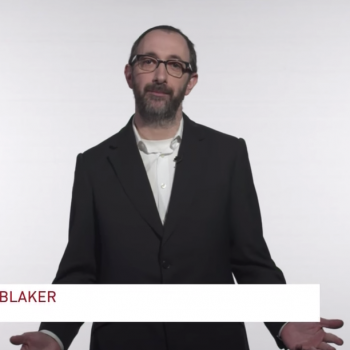 April 2, 2019 (A Very Misguided) Jewish Comedian Says We Shouldn't Mock Religious Beliefs
Browse Our Archives
What Are Your Thoughts?leave a comment