In 2017, Arizona State Rep. Athena Salman, an openly atheist legislator, delivered an invocation to open up the day’s session. It was a perfectly respectful speech, referring to “the humanity that resides within each and every person here.” Yet it offended Republicans who insisted all invocations needed to invoke a “Higher Power.” One Republican was even given permission to deliver his own prayer to effectively “correct” the one Salman gave.

It was disrespectful, rude, and a reminder that Republicans care more about Christian superiority than religious freedom.

Now, a version of that whole scenario just happened again.

On Monday, Salman delivered another invocation. This one was more tailored to her personal atheistic views, but it was hardly demeaning to anyone else. Yet watch what happens after her speech in the video below. Republican State Rep. John Kavanagh asks to speak, then proceeds to mock Salman by invoking his personal God in what can only be described as a Christian attempt at humor.

SALMAN: Take a moment to reflect on the wonders of the universe. Bask in the awe and magnificence of the diversity of nature. Look upon the soaring mountains, the vast seas, the cloud-studded azure skies. Ponder how living beings became so immensely diverse on our life-giving planet, how integrated and interdependent is all life meshed on our wondrous Earth.

Can we truly fathom the depth of the intricacies required to produce and sustain living beings such as animals, plants, microbes, the engines that support the survival of such diverse lifeforms on an incredibly insignificant planet in an insignificant galaxy in an insignificant corner of an unimaginably immense universe that may possibly be a single speck floating in a sea of universes?

The wonders of [nature dwell] deep in the hearts and minds of all people living on this wondrous rock we call Earth, as it makes its endless journey around a life-giving star we call sol.

No matter what we may call it, we give thanks to the awe and inspiring power of nature itself.

KAVANAGH: Thank you, Mr. Speaker. I rise to a point of personal privilege. Introduction of guests to the gallery.

To summarize: An atheist delivered an invocation. A Christian decided he would be a dick about it. Republicans were apparently okay with this.

Yesterday, Salman responded during the legislative session with a speech denouncing Kavanagh’s rebuke. This time, she was surrounded by several allies.

Better quality audio and video of @AthenaSalman's protest today of Rep. John Kavanagh's mocking response to her secular invocation during Secular Day at the Arizona Capitol on Monday. #AZLeg. pic.twitter.com/wM5v8aoEqf

I rise to protest today because I want to make it clear I have never denigrated another member’s invocation, yet for the third year in a row, members of this body have belittled my religious beliefs in ways that are humiliating and uncalled for.

Yesterday’s action by the representative from Fountain Hills, mocking my invocation, which was written by his constituent… violates the Arizona Constitution Article 20 Section 1, that requires “perfect toleration… and no inhabitant of this state shall ever be molested in person or property on account of his or her mode of religious worship, or lack of the same.”

Additionally, it violated the U.S. Constitution and Supreme Court ruling in Greece vs. Galloway in 2014 that prohibits the disparaging of other faiths or none.

Finally, it violates House Rule [26], Privilege of the House, as it exhibits behavior unbecoming of a member. The Arizona Court has made it clear… when it said, “We cannot imagine that the legislature would give preferential treatment to one religion over another because one is more established and thus more acceptable than another.”

Yet for years, members of a more established religion in this chamber have disparaged members of non-faith. This is in clear violation of our rights. It was in violation of Representative Kavanagh’s constituents’ rights.

My mother was in the gallery. My grandmother… I was so ashamed that I didn’t even [introduce them because of the behavior that we witnessed on the floor. So I protest. Thank you.]

My transcript doesn’t do justice to the emotional weight you hear at the end of her speech.

Arizona’s Speaker of the House, Rusty Bowers, followed that rebuke… by moving on and pretending like it didn’t happen.

Imagine for a moment if an atheist responded to a Christian invocation by reminding the entire room that God is fictional. It would be a national news story. It would feed Tucker Carlson‘s family for the next week.

If Kavanagh didn’t like Rep. Salman’s invocation, he should fight to get rid of the archaic practice all together, not mock his colleagues who don’t share his faith. It’s not just disrespectful to the speaker, it’s a sign that he doesn’t give a damn about actual “religious freedom.” He wants to celebrate Christian privilege, that’s all, and any non-Christian who dares to exercise the same rights must be humiliated.

Rep. Salman told me last night that “It’s time for real tangible accountability for the infringement on the first amendment rights of people of non-faith.”

Bravo to her for being a voice of reason on that House floor, especially since it’s apparent there aren’t many of those sharing that space. 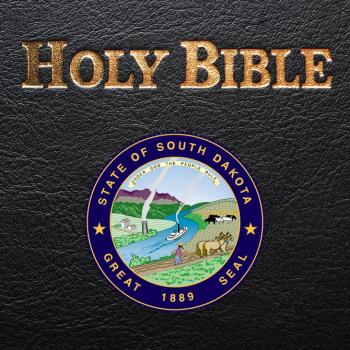 February 13, 2019 The People Behind God's Not Dead Are Making a Film About Planned Parenthood
Browse Our Archives
What Are Your Thoughts?leave a comment