Last night, a still-on-vacation Stephen Colbert aired a pre-taped episode of The Late Show in which he swapped places with some of his more popular guests. So rather than interviewing Neil deGrasse Tyson, the astrophysicist interviewed Colbert.

Their conversation in particular focused on philosophy and religion. Tyson asked Colbert the age-old question, “Is it better to know or not know?” (Would you like to know the mysteries in our world or is it better to live in ignorance?)

Colbert, not surprisingly, said it was better to know. (“You can’t walk blindly in the dark.”) He also explained, later on, that he grew up in a religious home with a father who was an immunologist. Tyson attempted to reconcile those two worlds by asking Colbert how he resolved “the urges of a believer to reject evidence in favor of faith.”

Colbert didn’t like the premise of that question, leading to this mildly heated exchange:

Because there is no urge to reject evidence. I don’t think that my faith is related to evidence. They’re different things. My faith approaches a mystery. My faith comes from a place of a need to be grateful. Like my faith comes from a place where I am grateful for the world, and I cannot answer the question, “Why is there something instead of nothing?” as you and I have discussed many times. And so until you can tell me why there is something rather than nothing, I see a place to place my gratitude for my existence, how strange it is to be anything at all. From there, I can extrapolate into my own tradition, which is Christianity and Catholicism, and my gratitude for Christ, through Him all things were made.

TYSON: [Jokingly, to audience] He rehearsed that, I’m sure.

COLBERT: I like evidence, because it is better to known than not to know. And I was taught by intellectual Catholics who believed you could still be a Catholic and still question your Church.

His answer isn’t a bad one for a Catholic who lives in the mostly secular world of comedy. But there are a number of apologetic tropes he brought out that sound good but have little substance. And since Tyson, perhaps out of respect or limited time, didn’t press him on any of it, we can do that here.

1) Colbert said he has no urge to reject evidence. But Christianity — especially Catholicism — requires a suspension of disbelief. To believe that Christ rose from the dead, or that a consecrated communion wafer is literally the body of Jesus, or that a virgin was impregnated, or that miracles actually happen requires you to reject the reality we live in. You can’t say you accept gravity while also believing (on faith) that some people can defy it. The magisteria overlap whether you like it or not.

2) Colbert said he couldn’t answer why there’s something instead of nothing, and that’s a legitimate existential question, but suggesting that God poofed us into existence via the Big Bang or anything else is just wishful thinking that gets us nowhere. We don’t have an answer to the question. We arguably never will have an answer to that question. Making up our own answer might give us comfort, but that doesn’t mean our answer is correct. (As the famous retort goes, then who created God?)

And, of course, it’s a far cry from saying a Higher Power created the universe to “This wafer contains Jesus.”

3) Colbert says he grew up understanding that you could be a believer who questions the Church. He’s not alone. Many religious leaders, rather than dismissing questions about belief, say they welcome challenges to their faith. But in Colbert’s case, questioning the Church isn’t the issue. It’s how the Church responds.

And in the Catholic Church’s case, we’re talking about an institution that has failed, morally and intellectually, throughout its history. Even today, it’s an organization that rejects the legitimacy of same-sex unions, fights against women’s health, prolongs suffering for those ready to end life on their own terms, etc. At some point, your ability to question the Church becomes nothing more than a cop-out for supporting an institution that doesn’t deserve it.

As someone who has been a fan of Colbert for years, his response echoes what he’s said many times over the years. It’s the sort of Catholicism that plays well with a mainstream audience. But that doesn’t mean his beliefs, comforting as they may be, shouldn’t be challenged.

At least he’s willing to have these debates with Tyson, Bill Maher, Ricky Gervais, and other well-known non-religious guests.

Now if only Tyson would push back a little more… 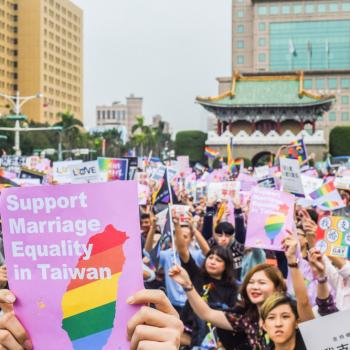 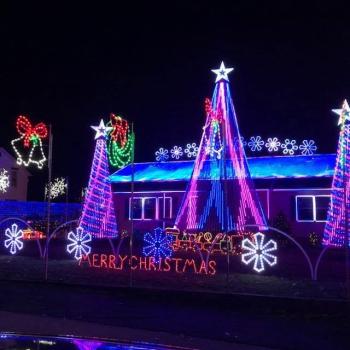