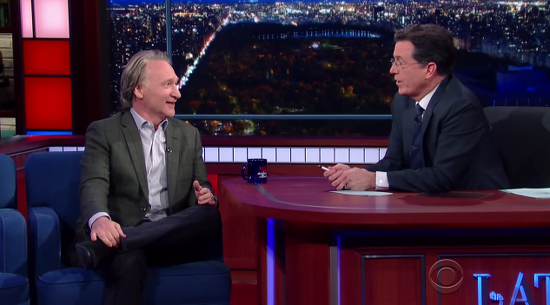 Colbert: Bill, they say at a dinner party, you should never talk about sex, politics, or religion. Have you ever been invited to a dinner party in your life?

Colbert: Are there things you won’t talk about?

Maher: I probably wouldn’t be invited to your dinner party because we’re very opposite.

Colbert: Really?! How so? How are we opposite? Really?

Colbert: Yeah, I’m married and I give religion a shot, yeah.

Maher: Oh, I thought you were a practicing Catholic.

Colbert: I am. Doesn’t mean I’m good at it. (Laughing) I’m not! Honest to god! I suck. I suck as a Catholic. Doesn’t mean I don’t keep doing– you were raised Catholic, right?

Maher: I was raised Catholic.

Colbert: Come on back, Bill. The door is always open! Golden ticket! Right before you! All you have to do is humble yourself before the presence of the Lord, admit there are things greater than you in the universe that you do not understand, and salvation awaits you. Take Pascal’s Wager! If you’re wrong, you’re an idiot. But if I’m right, you’re going to hell.

Maher: I do admit there are things in the universe I don’t understand. But my response to that is not to make up silly stories.

Maher: … or to believe intellectually embarrassing myths from the Bronze Age, but you believe whatever you want!

Colbert: Well, yeah, I mean, I have a connection to our ancestors because I–

Maher: Sure. Because these were men who didn’t know what a germ or an atom was, or where the sun went at night, and that’s where you’re getting your wisdom. Anyway, let’s not… let’s not argue…

Colbert (Laughing): I like it! I like it! I could eat a big bowl of this. This is good. It’s tasty! You see, my religion teaches me humility in the face of this kind of [attack].

If you’re reading body language, Colbert was clearly enjoying the discussion, while Maher was genuinely bothered by the fact that someone like Colbert still believed in this nonsense.

I imagine Colbert, surrounded by comedians most of his life, has had many of these discussions before. Then again, if he’s bringing up Pascal’s Wager, he hasn’t been debating the right people. Still fun to watch.

November 17, 2015
The Power of Skepticism: Why Doubt is a Virtue
Next Post