There’s this strange argument Christian apologists make whenever atheists say murder is bad or charity is good. They claim we can’t possibly use those words unless there’s some standard for goodness… which could only have come from God. (Checkmate, atheists.)

That’s the same warped logic used by self-proclaimed “prophet” Charlie Shamp who says critics have no business calling him (or anyone else) a “false prophet” — because that phrase implies real prophets exist.

He made the comments while explaining a revelation he had regarding Brett Kavanaugh. The specifics there aren’t important but check out what he says around the 9:28 mark:

… It’s very interesting that the same people that believe and will claim someone to be a false prophet don’t even believe that prophets exist today. I want that to sink in for you. Because if prophets don’t exist today, then there’s no reason to call someone a false prophet.

But what I’ve noticed over the years, as I’ve been prophesying, is that people will sit there and they will, you know, say all kinds of things, but then when the word of the Lord comes to pass, they never come back and repent and say that they were wrong.

And that’s why I am not afraid to be bold about the prophetic words that I’ve been given and that the Lord has specifically spoke to me.

This is a bizarre and easily refutable line of thinking. Shamp is a false prophet because he doesn’t have any special powers, not because someone else does. We’re not comparing him to actual prophets. We’re comparing him to his own idea of what a prophet is.

It’s not our job to prove him wrong; it’s his job to prove himself prophetic, and like all self-proclaimed conduits to God, he doesn’t have proof. A coincidence (or a vague revelation that you interpret as true at some point in the future) doesn’t make you magical. 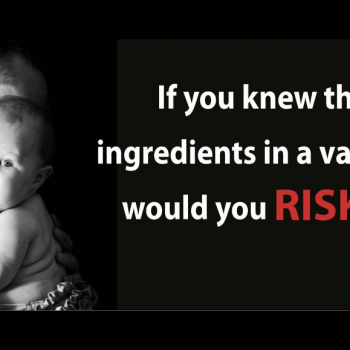 October 2, 2018
Anti-Vaccination Billboard in New Zealand Comes Down After Deluge of Complaints
Next Post

October 2, 2018 Atheist Loses Legal Challenge Against “So Help Me God” in Citizenship Oath
Browse Our Archives
What Are Your Thoughts?leave a comment