Pastor Regrets Speaking in Tongues in Viral Video Because Outsiders Don’t Get It August 29, 2018 Hemant Mehta

Last week, Alabama Pastor John Kilpatrick of the Church of His Presence in Daphne went viral with a video in which he urged his congregation to pray in defense of Donald Trump against the “witchcraft that’s trying to take America back over.”

Around the 3:19 mark of the video, he began speaking in tongues, making the already idiotic prayer even more ridiculous.

Kilpatrick addressed the viral nature of that clip this week, telling his church that he would’ve done it a little differently if he knew this many people were going to watch it. (Naturally, though, he assumes the video is helping bring people to Jesus instead of driving them away from Him.) The relevant portion begins at the 39:15 mark:

… you know, the only way to look at it is… if I was gonna release that video, which I had no intention, I mean, when I got through preaching last week, I got a Whataburger and went home. I thought it was done, you know what I’m sayin’? But then all of a sudden, my phone began to ring, and people said, “We’re praying for you.” And I said, “What’s wrong?” I didn’t even know! I was busy on the road…

… Here’s the thing. If I would’ve released that, which I had no intention of doing, it was just a Sunday morning sermon to me, you know, and we just ended up by praying for President Trump, that was home cooking, you know? That wasn’t meant for anybody else. But… whenever it hit, I had to say, “Well, you know, the Lord evidently wanted this out, tongues and all.” Because I would’ve omitted the tongues, because, you know, I mean, I’m a Pentecostal preacher. I’m a revivalist. I speak in tongues. I’m not ashamed of it at all. But if I was gonna release something like that, I wouldn’t release that, you know, for the world to look in and see that, because they don’t understand that kind of stuff. But I would’ve released the same words, but I’d just took some of that out.

Kilpatrick doesn’t realize that what he said outside of the Jesus Gibberish was just as problematic as his made-up language. Remember: He told everyone that “the Deep State is about to manifest, and it’s going to be a showdown like you can’t believe.” Speaking in tongues makes far more sense than any of that right-wing paranoia bullshit.

He then attributed the viral video to the Holy Spirit really wanting it out there… and not everyone mocking the hell out of a crazy man and his followers.

(via Raw Story. Thanks to Randal for the link) 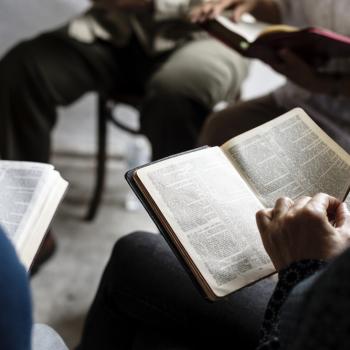