Attorney General Jeff Sessions announced the creation of the taxpayer-funded “Religious Freedom Task Force” yesterday alongside the Colorado baker who refused to serve a gay couple, Catholic bishops who want to use faith to avoid letting gay couples adopt children at their taxpayer-funded agencies, and members of the anti-LGBTQ legal powerhouse Alliance Defending Freedom. The group seeks to defend those who are fighting for their right to discriminate — against LGBTQ people or anyone else — based on their faith. It’s based on an executive order signed by Donald Trump last May and a subsequent memorandum issued by Sessions in October.

As the Human Rights Campaign (HRC) pointed out, this is only the most recent attack on the LGBTQ community by Trump and his administration for the last 18 months.

“This taxpayer funded task force is yet another example of the Trump-Pence White House and Jeff Sessions sanctioning discrimination against LGBTQ people,” said HRC Legal Director Sarah Warbelow. “Over the last 18 months, Donald Trump, Mike Pence and Jeff Sessions have engaged in a brazen campaign to erode and limit the rights of LGBTQ people in the name of religion. The Attorney General standing shoulder-to-shoulder this morning with anti-LGBTQ extremists tells you everything you need to know about what today’s announcement was really all about.”

The issue isn’t that critics want to get rid of religious freedom. That is important, but that’s not what this administration is truly fighting for with this “task force.” There’s a difference between practicing the religion of your choice — or none at all — and using your religion as a weapon against vulnerable communities.

In announcing the task force, Sessions claimed that “religious Americans are no longer an afterthought” and that the country has become “less hospitable” to religious people. Are we talking about the same country? The one where 70% of the population is some brand of Christian, along with 90% of Congress?

This program isn’t correcting any imbalance in power for religious citizens; it’s giving religious people special rights over the rest of us. And — let’s be honest — by religious people, Sessions was really just referring to Christians.

It’s actually a “religious privilege task force,” according to Larry T. Decker, Executive Director of the Secular Coalition for America.

“This is a religious privilege task force — plain and simple. According to Attorney General Sessions, this task force is going to take its marching orders from the Justice Department’s Memorandum on Religious Liberty. That Memorandum lays out the entire political agenda of the religious right and flips the entire notion of ‘religious liberty’ on its head by instructing federal agencies to treat religious belief as an incontestable get-out-of-jail-free card.”

“If fully implemented, the Memorandum would give individuals, organizations, and for-profit corporations that claim a religious affiliation an exemption from a whole swath of federal, state, and local laws. When this Memorandum was announced, we called it a ‘declaration of war’ against the LGBTQ community, women, nontheists, and religious minorities. The task force Sessions’ announced today will be his foot soldiers in the war against the wall of separation between church and state.”

Americans United for Separation of Church and State shared a similar sentiment:

“Today’s event by the Justice Department offends the true meaning of religious freedom,” said Rachel Laser, president and CEO of Americans United. “The event was clearly designed to advance the Trump administration’s twisted and dangerous view of religious freedom, one that uses religion to discriminate and harm others. This event exposed the administration’s real agenda: to preserve the power of Christian fundamentalists.”

Americans United noted that the Trump administration has consistently misused religious freedom, interpreting that principle to authorize discrimination in doctor’s offices and hospitals, workplaces, businesses where people shop and in the government-funded services many Americans rely on.

The American Humanist Association said the task force would “jeopardize the civil rights of countless Americans”:

“We are disturbed that Jeff Sessions is using the Department of Justice to create special rights for the Religious Right at the expense of other Americans,” says Roy Speckhardt, executive director of the American Humanist Association. “This is a continuation of the Trump administration’s pattern of attacks on effective religious freedom, demonstrated by earlier attempts to gut the Johnson Amendment and ban immigrants of specific faiths.”

Matthew Bulger, Legislative Director for the American Humanist Association, stated that “With the creation of this task force, the Trump administration is making clear that it is determined to utilize public funding to promote the discriminatory beliefs of the Religious Right and will distort laws like RFRA to do so.”

The Center For Inquiry called this a way to “legitimize and even enforce discrimination against marginalized groups”:

“We firmly support the freedom of all individuals to follow any faith or none at all, but let’s not kid ourselves that Sessions is in any way concerned with upholding the freedom enshrined in the Establishment Clause of the First Amendment,” said Jason Lemieux, the Center for Inquiry’s Director of Government Affairs. “At a time when the Department of Justice sought to force a teenage girl to give birth against her will, Sessions’ enthusiasm for discrimination and the formation of this vindictive task force exposes his extremist, Religious Right agenda.”

“By conflating the serious harms suffered by the victims of religiously-based discrimination with the negligible inconveniences of individuals and businesses who seek to perpetrate that discrimination, Attorney General Sessions showed his true colors,” said Lemieux. “He plainly seeks to force women, LGBTQ individuals, atheists, and others to submit to the will of the Religious Right. His so-called ‘Religious Liberty Task Force’ is a farce that makes a mockery of freedom, further entrenching the Religious Right’s privilege to execute their bigotry in all areas of public life.”

It’s not a revelation that church/state separation in this country has been good for both sides. We’re a nation of laws, yet this administration wants to allow religion — the proper religion — to derail those rules. It’s only the latest way they’ve treated the religious majority as an oppressed minority. And it’ll come at the expense of the real victims of faith-based discrimination.

This isn’t just about wedding cakes for same-sex couples. This is about the right we all have to live in a secular country with a variety of religious perspectives.

Let me know when Sessions goes all out to defend an atheist or Muslim, or admits that a Christian was wrong to use religion as an excuse. For now, this is just another dog bites man story for this administration. It’s an extension of their willingness to coddle their base while alienating just about everyone else.

As one cartoonist pointed out, those who understand the history of Christianity should be disturbed by any mention of a “task force.” We’d be wise not to repeat the mistakes of our ancestors. 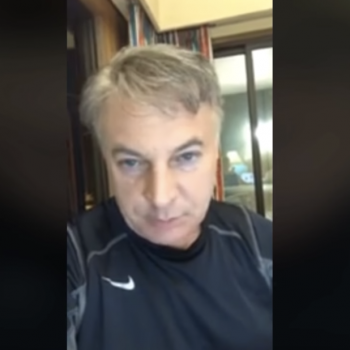