Angry Young Preacher: Scientists Are Hiding the Truth About the Sun and Moon May 8, 2018 Hemant Mehta

Angry Young Preacher: Scientists Are Hiding the Truth About the Sun and Moon

Yesterday, I posted about an angry young Christian preacher named Matt Powell who went on a rant about how atheists were all these Coke-drinking, video game-playing idiots. (Not true. Our beverages of choice are Diet Pepsi, coffee, and shots of Johnnie Walker Black.)

Powell has posted a few more clips from his sermon and one of them takes place just a few moments before that particular rant. This one is glorious because you hear him talking about all the science that he understands but atheists don’t.

You know how this ends. All the “science” he mentions makes no sense at all…

I’ll give him half credit for that. If you take away Powell’s fantasy book, he’d be lost since he bases all his knowledge on it.

If you took away evolution? First, that doesn’t even make sense since evolution is baked into the entire system. But we’d also be left with all the other mountains of evidence in support of a universe guided by natural explanations. We’d be doing just fine. Evolution was discovered only about 150 years ago. Atheists existed, for good reason, long before then. Evolution only confirmed what we already knew.

But back to the science…

And isn’t it amazing that all scientists will say, is… they come out and just openly say, “Oh yeah, the Sun is burning up 250 tons a second.” But at the constant that the sun is burning, within just 100 years, you do know… or 1,000… excuse me, a million years. You know, a million years just seems crazy. But that’s how evolutionists are. They’re like little magicians, you know? You gotta bring out the big numbers, try to be impressive, you know? … Even though it’s kind of illogical.

But, you know, just one million years ago, the Sun would’ve completely engulfed the Earth. That’s a scientific fact. And they’re just now figuring… they’re like, “Whoa!… What do we do with this?” But they won’t tell it to people because they don’t want to admit they’re wrong!

But the Sun is actually burning at a constant and it’s burning… further and further down. So just a million years ago, do you realize our Earth would’ve been completely engulfed by the Sun?

It’s true that the Sun is burning up several hundred million tons of hydrogen per second. It still has enough to keep going for about another 5.4 billion years.

The idea that scientists know this and are covering it up is an absurd conspiracy theory.

Whoa no! But it’s logical to believe in evolution! I think the Earth’s millions of years old!

He’s right. You would be an idiot since it’s roughly 4.54 billion years old.

But then we get to the best part. About the moon and the waves and how the tides go in and out…

I wish this guy lived in “Bible days” too… alas, we can’t get everything we want.

Also, the Bible is wrong. The moon isn’t a source of light at all. It merely reflects light from the Sun. The rest of us learned this in, like, first grade.

But, you know, the moon is getting further and further away!

And the moon, folks, I don’t know if any of you know this, but the moon causes our tides, and it’s getting further away. And so… let’s just use one million years. They say 6.2 billion, which is just insane, but, you know, let’s just say one million years, for example.

With the constant that the moon is moving away, we would’ve been flooded just a million years ago. And the moon still causes tidal waves today! It still causes… but “Oh no, it’s just so logical to believe in evolution. I think the Earth is just billions of years old.”

His timing is completely off here. A million years is waaaaay too young for the moon to have the effect he’s talking about. But a long time ago, yes, the waves would’ve been larger — that may have helped form life on this planet — though other factors would also come into play to offset the effect Powell thinks it would have.

Scientists know all this. But the pastor is acting like it’s some sort of conspiracy, never even considering that maybe, just maybe, his own understanding might be off.

I had an atheist tell me, “You don’t believe we’re related to that grass outside?”

This only confirms what we said yesterday. If you don’t understand science, don’t trash science, because you’ll only come away looking like a moron.

This is the first time, though, I’ve seen someone butcher the facts and then follow it up with a triumphant reference to Hitler. It takes real talent to be this ignorant. 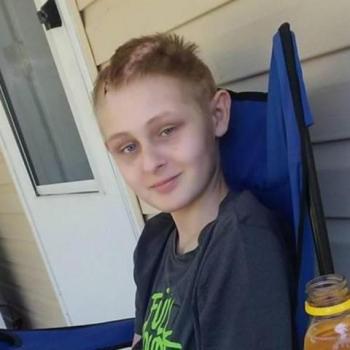 May 8, 2018
Alabama “Miracle Boy” Wasn’t Brought Back to Life by God Because He Never Died
Next Post