Ravi Zacharias Lied About His Credentials, and It’s All Your Fault December 4, 2017 Hemant Mehta

Ravi Zacharias Lied About His Credentials, and It’s All Your Fault

It’s been more than a year since we found out Christian apologist Ravi Zacharias has been lying about his credentials, and last night, he finally admitted… that he did nothing wrong.

You may recall that Zacharias said, among other things, that he held “three doctorate degrees” (and called himself “Dr. Zacharias”), said that he “has been a visiting scholar at Cambridge University,” and referred to himself as “senior research fellow” at Oxford University. More recently, we learned that he claimed to be “chairman of the Department of Evangelism and Contemporary Thought at Alliance Theological Seminary.”

It turns out he earned zero doctorates, had no formal connection to Cambridge University, and wasn’t a “senior research fellow” at all. As for the “Department of Evangelism and Contemporary Thought”? It never existed.

Atheist attorney Steve Baughman has been looking into these lies for a while now — and he finally got a response to his articles last night in the form of a public statement from Ravi Zacharias International Ministries.

It’s not an apology. Don’t call it an apology. Because they’re following the Donald Trump practice of never admitting any wrongdoing. If there’s a problem, it’s always someone else’s fault. There’s no lie that can’t be rationalized.

Let’s go through it.

The veracity of some of the educational credentials — specifically the use of the “doctorate” designation — of our Founder and President, Ravi Zacharias, have been called into question. While Ravi personally does not brandish his credentials and routinely asks not to be referred to as “Dr. Zacharias” — even by employees — our organization bears his name and, as such, we would like to take this opportunity to clear up any misunderstanding.

That’s bullshit. As recently as a year ago, the words “Dr. Zacharias” were in the biography on his official website. Just because he may have told people in person not to call him doctor doesn’t mean he wasn’t using those letters to make himself appear more academic.

Neither Ravi Zacharias nor Ravi Zacharias International Ministries (RZIM) has ever knowingly misstated or misrepresented Ravi’s credentials. When it has been brought to our attention that something was stated incorrectly with regard to Ravi’s background, we have made every effort to correct it. Sometimes other entities — such as publishers or institutions where Ravi was speaking — have incorrectly presented aspects of his credentials. We were not aware of these errors when they were made; however, in some instances RZIM should have caught them and sought to have them corrected. We regret any and all errors, as well as any doubt or distraction they may have caused.

I do a lot of speaking events. I’ve written books. And every single time there’s been a need for a brief biography, I’m the one who supplied it. It’s not like an author’s bio appears on the back of a book, and the first time the author sees it is when it’s already on the bookshelves. By that time, there’s been ample opportunity to fix the problem. Zacharias never did that.

And let’s suppose he or his people didn’t directly supply the information. Where would publishers or emcees have found the relevant information? Maybe by looking at Zacharias’ website, where he purposely lied.

All roads lead back to him, and it’s appalling to see his team blame everyone else for information Zacharias was fully in control of.

By the way, his ministry’s own press releases referred to him as “Dr. Zacharias.”

Currently, eleven RZIM team members have earned doctorates. Ravi is not one of them, nor has he ever claimed to have an earned doctorate. In fact, Ravi often states that he wishes he had done more formal studies, as he values and understands the importance of higher learning. Ravi has a Masters of Divinity from Trinity International University, and has also been conferred with ten honorary doctorates. Ravi is grateful for and humbled by where the Lord has taken him during his 45 years of ministry thus far.

How does a paragraph that long not include the word “apology”?

Honorary doctorates — from ten Christian schools, no less — are absolutely not equivalent to real, earned Ph.D.s. You sure as hell don’t call yourself “Dr.” when you get one.

What is it with Christian apologists getting honorary doctorates (from often unaccredited schools) and then acting like they wrote a dissertation and passed an oral defense?

In earlier years, “Dr.” did appear before Ravi’s name in some of our materials, including on our website, which is an appropriate and acceptable practice with honorary doctorates. However, because this practice can be contentious in certain circles, we no longer use it.

Who the hell says this is “appropriate and acceptable”? It’s wrong every single time. It was wrong when Maya Angelou did it, and it was wrong for Zacharias to do it.

He isn’t Dr. Zacharias. He’s Ravi, the guy with a masters degree.

In addition, some confusion may have arisen from a difference in cultural norms, as we are a global organization with staff members based in sixteen countries. In Ravi’s homeland of India, for example, honorific titles are customary and are used frequently out of respect for elders, including by the RZIM India team when addressing Ravi. Still, it is Ravi’s custom to request for the inviting parties not to use “Dr.” with his name in conjunction with any speaking events. Despite this, on occasion it has been our experience that we arrive to find promotional banners and materials welcoming “Dr. Ravi Zacharias.” We will continue to do our best to ensure consistency; however, we recognize that certain aspects are sometimes beyond our control.

As an Indian myself, it’s offensive for Ravi, the guy with a masters degree, to blame cultural norms for his own lies. And if Wikipedia can be believed, he hasn’t lived in India for over 50 years. That’s more than enough time to get acclimated to new cultural norms. He should know better than to use false credentials.

And if his team saw promotional materials incorrectly using “Dr,” did they ever say anything? How many times do you get to let that slide before you’re complicit in the lie?

At the very least, Ravi, the guy with a masters degree, could have begun all those speeches by telling the audience that he’s not really a doctor, just to clear up any confusion from the promotional material. He never did that.

There’s more to the non-apology, but none of it addresses Zacharias’ other lies. I guess we’re just supposed to forget about those.

Christianity Today has more on the statement along with a report on a sexting/extortion scandal Zacharias was involved in. He says he did nothing wrong, both sides settled the case behind closed doors, and neither side is talking about the details of that settlement.

The strangest thing about his biographical lies, as I’ve written before, is that Zacharias never needed to make anything up! He’s a compelling speaker who shares the Christian myth very effectively. You don’t need a Ph.D. to do that. (I could say the same about Joel Osteen, who talks very openly about how he never attended seminary or went through any formal training to be a preacher.) But that wasn’t good enough for him.

He made things up on his bio for no reason at all. And plenty of people believed him. That should tell you everything you need to know about how seriously to take his commentaries on Christianity.

Don’t trust him. He lies even when he doesn’t have to. Every speech he gives should come with a giant asterisk. 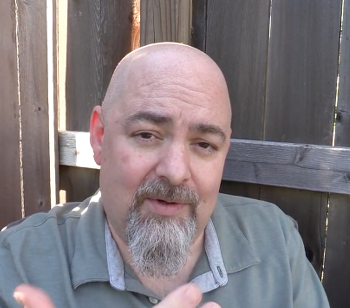