For weeks, “Mad” Mike Hughes, a limo driver and stuntman, has captivated people around the world with his plan to launch himself into the air in a 500-m.p.h. “homemade rocket” to prove the Earth is flat.

Some people were hoping Hughes would succeed and show that NASA has been lying to everyone. Others were eagerly awaiting his impending Darwin Award. But none of that matters, because it is now past the twice-delayed deadline, and Hughes has yet to launch anything.

The date Hughes gave me previously was December 3 — yesterday — so I checked his Facebook page, to see if he had informed his fans and donors about his re-revised plans. It turns out he hasn’t posted anything since November 15, 10 days before the original launch date, when he said, “The rocket is ready.”

I wanted to know for myself if the launch was still happening, so I emailed Hughes last night. He eventually got back to me, pointing me to a video uploaded to YouTube on Sunday by a group known as the FLAT EARTH NETWORK.

The video shows Hughes in Amboy, California, the small town where he said he planned to launch the rocket that says “Research Flat Earth” across the side. And he’s bragging about how the mission has already been a success.

It was successful, he says, because it gained media attention for himself and Flat Earthers.

The cameraman asks Hughes what he is “trying to prove here.”

“Well basically, the jump itself — we’re just trying to jump a mile with about 1,800 feet in altitude. And the purpose of this jump was to raise awareness and put my name back in the media, which it’s done around the world.“

In other words, many critics were right: This was nothing more than a publicity stunt.

I know, I know, it’s hard to believe someone who said he’d launch himself 1,800 feet in a rocket to prove the Earth is flat (when he could much more easily use a hot air balloon) would be doing it for the attention. But hear me out.

Hughes continues in a separate video, also uploaded yesterday by the same group, admitting that this launch is just “a stunt.”

“It was to raise awareness, which it has done around the world. It has become a worldwide media event. From Finland, to Australia, Canada, Romania has contacted me, Sweden, of course England has, Germany has, Israel has. Russia TV — they begged me for three days to do a live interview, XM Radio has contacted me, I got people wanting me to do radio tours, we’ve had four documentary filmmakers contact me, and a reality show now.”

The stunt appears to be more about his ego than anything else.

In that video, Hughes suggests the launch will still happen “in a few weeks,” which is a far cry from the Nov. 25 launch date he is still advertising on his website. He continues to blame “the government” for the delays, but the Bureau of Land Management has previously contradicted his account.

In the video, Hughes is already fundraising for his next spherical-planet-debunking rocket, which he says will take him 62 miles into the air. This, of course, comes after he raised at least $8,000 from Flat Earthers who supported his yet-to-be-seen first launch, despite the fact that he built the rocket from scrap parts in his garage.

Hughes got the attention he wanted. You could go even further and say this is representative of the entire Flat Earth movement — it’s not like they ever cared about the science — but Hughes still claims he’ll go up into space. Eventually. I doubt that, but if it ever happens, we’ll be waiting at the crash site with a Darwin Award in hand.

December 4, 2017
Ravi Zacharias Lied About His Credentials, and It's All Your Fault
Next Post 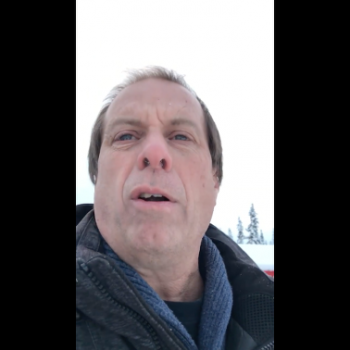