Shawn Jones, a 32-year-old pastor and gospel singer, died of a possible heart attack last week while performing at an event in Pensacola, Florida. It’s a tragedy, no doubt, especially given his age, but what makes this story so newsworthy is that Jones suffered a “light stroke” just over a year ago and announced to a congregation that he chose not to see a doctor about it. Instead, he prayed for healing. 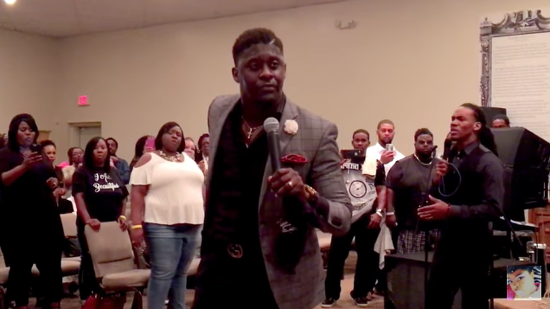 Jones shared his story during a revival in Alabama last August (2016).

“I looked at the pastor and he said ‘you alright?’ I said ‘yeah.’ I walked over and handed him the mic and sat down. Hands start tingling, fingers got numb, hands start hurting. The first thing the devil said to me, ‘you having a stroke,'” he recalled.

Instead of signaling the church to get him medical help, Jones said he simply kept trusting God to help him out of what he felt was a spiritual attack.

“How many know when you at your lowest when the enemy sneak in. I start having all kind of thoughts ‘God I’m out in Baltimore all by myself.’ But something in the back of my head said, ‘I don’t believe he brought me this far to leave me now,'” he told the congregation.

Despite the stroke, he took a plane back home the next day, drove home (somewhat haphazardly), and only saw a doctor days later. He was lucky to be alive.

And then, a week ago, while singing the same song as when he told that story about his initial stroke, it happened again.

Kenneth Woodson, manager of The Event Center, said Jones and his band had only been on stage for about 10-15 minutes before he collapsed and never revived on Saturday night.

D. Danyelle Thomas, who writes at Unfit Christian, notes that faith may not be solely to blame here. African-Americans have good reason to be wary of medical treatments and “no one should be shocked that we don’t trust medicine.” Still, she writes, there’s no reason to think being a Christian goes against seeing a doctor in a time of need.

Did God not create the doctors and give them the knowledge to heal? Is not still a miraculous healing if it comes through medical care and treatment? Could it be that what we claim as faith is actually deep-seated fear? A fear that accepting and participating in human interventions is seen as a doubting God’s complete and total omnipotence. A fear that is quite literally killing us.

To testify about medical crises as a spiritual attack that requires divine intervention is detrimental to the body of Christ. I would argue that his stroke was not an attack of the enemy, but a cry from his body for care.

Caring for your temple is not demonic. Accepting medical diagnosis as fact does not a doubting believer make. Seeking medical care does not signal a fall from God’s grace.

The question that still lingers is whether a quicker diagnosis last year could’ve prevented what happened last week. Jones prayed for healing instead of getting actual help. He was putting himself in danger. Jones has every right to refuse medical treatment if it goes against his beliefs, but doing so out of ignorance means he was getting bad information somewhere along the line.

How many other believers would do the same in his situation? Let’s hope his story serves as a cautionary tale for those who think God will fix the very problems they believe God created.