Why Jesus Dying for Our Sins Makes No Sense At All March 27, 2017 Hemant Mehta

Why Jesus Dying for Our Sins Makes No Sense At All

Noah Lugeons is one of the co-hosts of The Scathing Atheist podcast, and he just released a Kindle-only collection of essays called Diatribes, Volume 2 compiled from weekly rants he delivers on the show. 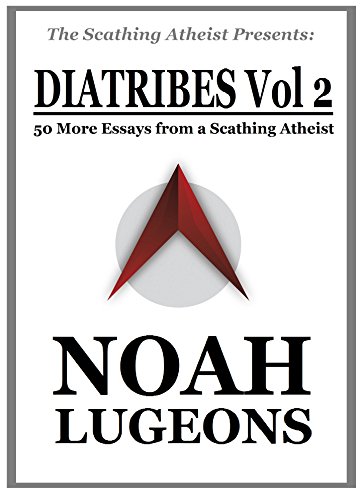 In the essay below, slightly edited for this site, Lugeons writes about how Jesus “dying for our sins” really makes no sense at all.

Picture this: it’s a Sunday afternoon and it’s gorgeous outside and I hadn’t settled on what to do this week’s diatribe about yet, so when I wandered out of the store and saw the little church group set up in the parking lot, I said, “what the hell?” and moseyed over. Their table was manned by three women and an old man, all wearing matching teal shirts with something about Jesus on the breast of them. And they had a little sign that said, “Do you have questions? Let us help you find the answer in Christ.” So technically, they were asking for it.

So I smiled and said “hi.” And I told them in advance that I was an atheist. I even warned them that I wasn’t looking for a religion or anything, but I did have a lot of questions about the tenets of Christianity. And three of them smiled and the other lady went to get a Coke. And the bifocal lady was really nice at first and she said, “We’ll answer you if we can.”

I lead off with what I considered a softball. I asked them, “What does it mean that Jesus died for my sins?”

She launches into the whole “original sin” thing and tells me about how we’re all born with sin and we all fall short. But, lucky for us, God made the ultimate sacrifice and sent His only begotten son to die for us so that we could be redeemed.

And I agreed that, yes, those were all words and all, but they didn’t really answer my question. And while we’re on the subject, how, exactly, is God making a sacrifice here? He lives in Heaven. When Jesus died, He ascended to God’s house. So… where’s the sacrifice? It’s like Jesus was active duty.

But she wasn’t quite tangled in her theological web yet, so she kept weaving. See, she said, Jesus was God and all the suffering He went through on the cross was actually God suffering. So not only did He have to let His kid go to camp for a super long time, but He also had to be brutally murdered. Ergo, ultimate suffering.

I reminded her that murder doesn’t really count if you get to come back to life three days later. So, at best, He was brutally tortured. But even if we call it murder, it’s not like Jesus’s crucifixion makes the top billion of the worst suffering of all time, does it? If you gave me the choice between being crucified or dying of pancreatic cancer, I’d bring my own nails. And that’s even if I don’t get to rise again at the head of a zombie army after three days. So what’s so ultimate about Jesus’s suffering? Fuck, Caligula used to have people executed by having them cut a thousand times over several days. Nero used to crucify people and set them on fire. So Jesus’s suffering wasn’t even all that bad compared to what Romans were doing around that time.

And, really, when you consider that He didn’t actually die, His suffering is basically on par with an elbow tattoo. I’d argue that Jesus suffered significantly less than, say, that dude in Iowa that had the hiccups for sixty years. And nobody goes around saying “Charles Osborne hiccupped for your sins” or anything.

And how does one guy suffering abdicate another guy from responsibility for his sins? And just who set up all this “humanity redeeming” red tape that God had to navigate? And if the sins are preloaded software, what’s God so pissed about? Didn’t He write the software? Does this even make any sense to the people selling it?

But, of course, I never made it that far into my questions. At a certain point, the old guy cut bifocal lady off and explained how, at a certain point, you have to set your questions aside and just have faith. At which point I reminded them that their sign specifically asked for questions. And then he politely asked me to leave. And then he impolitely asked me to leave. And then he told me I was going to burn in hell if I didn’t change my evil ways.

So I asked for one parting question, and he granted it. I said, “If you’re not allowed to ask these questions, how do you know you have the right religion?”

He didn’t answer. But that’s okay… it was rhetorical anyway.

You can read several other essays like this in Diatribes, Volume 2. And be sure to support the Scathing Atheist podcast!