If devout Catholic Stephen Colbert invites atheist Ricky Gervais on his show, you can bet religion’s going to come up in their conversation. Last night, they didn’t even wait for the topic to arise organically. They went right at it, debating the First Cause, the definition of atheism, and why Gervais doesn’t just “have faith” in science. 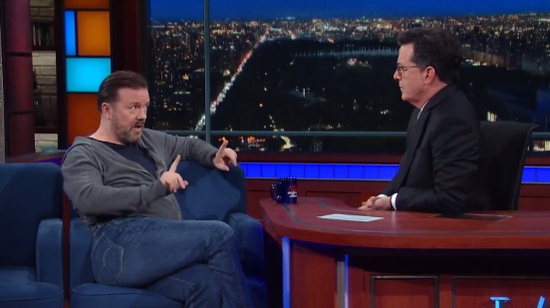 You don't want to miss this on #LSSC tonight: @rickygervais debates religion, science, atheism and more with @stephenathome. pic.twitter.com/HeKybVnnny

The conversation wasn’t combative, but it did allow both of the comedians to pull out their talking points.

GERVAIS: … Atheism is only rejecting the claim that there is a god. Atheism isn’t a belief system. So this is atheism in a nutshell. You say there’s a God. I say, “Can you prove that?” You say no. I say, “I don’t believe you then.” So you believe in one God, I assume?

COLBERT: Uhh…. in three persons, but go ahead.

Gervais also told Colbert that he feels immense gratitude for his existence because “I know the chances are billions to one that I am on this planet as me and never will be again.”

And then, when told that his belief in science was also a kind of faith, Gervais pushed back with this lovely monologue:

GERVAIS: … Science is constantly proved all the time. You see, if we take something like any fiction, any holy book… and destroyed it, in a thousand years’ time, that wouldn’t come back just as it was. Whereas if we took every science book, and every fact, and destroyed them all, in a thousand years they’d all be back, because all the same tests would [produce] the same result.

I know all of these lines are ones all of you have probably heard many times before — but recognize that that’s not necessarily the case for Colbert’s late night audience. What a delight to see Gervais make the same points that people like Richard Dawkins always get across — but with a much larger audience that didn’t ask to see a religious debate.

When Bill Maher appeared on Colbert’s show in 2015, they also debated God, but it was much more awkward. Maher looked down at Colbert for being a believer, and the conversation came off as condescending (even though Maher’s points were right on).

Gervais, on the other hand, did a wonderful job explaining his position without treating Colbert like an idiot. It was much more effective.