The Argument From Personal Experience (Debunked)

Most religious people who want to convince you of God’s existence will tell you a personal story. They know God exists because something happened to them. It doesn’t carry much weight with atheists — as the saying goes, the plural of anecdote is not fact — but those personal testimonies can be very compelling.

In the video below, at the YouTube channel Rationality Rules, the speaker does an excellent job explaining why these kinds of stories are worthless in theological debates: 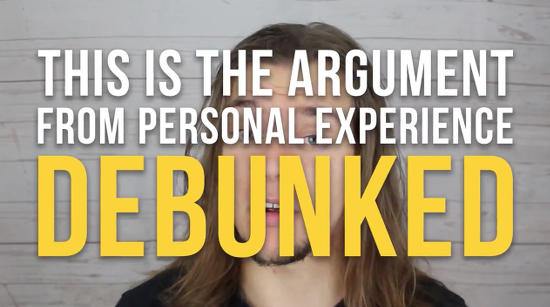 Here’s the list of reasons in a nutshell, though you should watch the video for a longer explanation of each:

1. Most, but not all, Contradict Reality.

2. Most, but not all, are Mutually Exclusive.

3. They all commit an Anecdotal Fallacy.

4. They all commit an Appeal to Emotion Fallacy.

5. They all commit an Argument for Authority Fallacy.

6. Some, but not most, commit an Argument from Ignorance.

December 18, 2016
Podcast Ep. 140: The Producers of the Documentary We Believe in Dinosaurs
Next Post