More and more evangelical leaders are starting to back away from Donald Trump, especially after his bragging about groping women came to national attention. However, James Dobson, founder of Focus on the Family and the Family Research Council, is still strongly endorsing the Republican candidate.

You might think this would go against Dobson’s supposed “Christian” values, but Dobson’s beliefs have a lot of room for the sentiment that “boys will be boys”… and Dobson has a very dark view of boys (and men).

Specifically, he believes that men, especially “baby Christians” like Trump, are often pushed and pulled by external influences, and sometimes they just can’t help themselves. Sex is an addiction, and women are a drug. For more insight into this mindset, we can look at Dobson’s famous interview with another “baby Christian,” serial killer Ted Bundy.

Shortly before Bundy was executed for the rape and murder of dozens of women, he professed to have accepted Jesus into his heart. He then granted what Focus on the Family claimed was an exclusive final interview with Dobson… part of which included Dobson prompting Bundy to talk about how he never would have killed a woman if he hadn’t discovered softcore pornography as a boy. 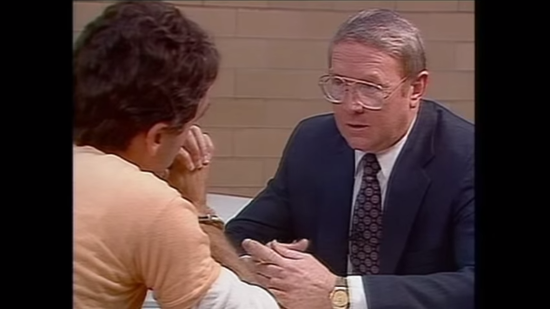 BUNDY: There is no way to describe the brutal urge to do that, and once it has been satisfied, or spent, and that energy level recedes, I became myself again. Basically, I was a normal person. I wasn’t some guy hanging out in bars, or a bum. I wasn’t a pervert in the sense that people look at somebody and say, “I know there’s something wrong with him.” I was a normal person. I had good friends. I led a normal life, except for this one, small but very potent and destructive segment that I kept very secret and close to myself. Those of us who have been so influenced by violence in the media, particularly pornographic violence, are not some kind of inherent monsters. We are your sons and husbands. We grew up in regular families. Pornography can reach in and snatch a kid out of any house today. It snatched me out of my home 20 or 30 years ago. As diligent as my parents were, and they were diligent in protecting their children, and as good a Christian home as we had, there is no protection against the kinds of influences that are loose in a society that tolerates….

DOBSON: Outside these walls, there are several hundred reporters that wanted to talk to you, and you asked me to come because you had something you wanted to say. You feel that hardcore pornography, and the door to it, softcore pornography, is doing untold damage to other people and causing other women to be abused and killed the way you did.

BUNDY: I’m no social scientist, and I don’t pretend to believe what John Q. Citizen thinks about this, but I’ve lived in prison for a long time now, and I’ve met a lot of men who were motivated to commit violence. Without exception, every one of them was deeply involved in pornography — deeply consumed by the addiction. The F.B.I.’s own study on serial homicide shows that the most common interest among serial killers is pornographers. It’s true.

Imagine that. They are essentially saying that a woman’s body is so incredibly powerful that if she’s seen naked, good guys — normal guys — are compelled to rape, torture, and kill. This extends even to children; when Josh Duggar‘s crimes came to light, the excuse was tossed around that he was driven to molest his sisters because he had changed their diapers.

When I was a young teen, the Life On The Edge video series was part of my church sponsored sex education. We watched Dobson’s interview with Ted Bundy, and then the youth leaders divided up the class into groups of boys and girls. In the girls’ group, we were told that although both boys and girls were responsible for their own actions, we girls had to be extra guarded to save our purity, since boys were so easily driven by lust.

For a closer look at Dobson’s own words about the responsibility of women and girls, here’s a passage from his 2010 book Bringing Up Girls:

“Women hold the keys to masculine behavior. Guys are inclined to take what they can get and be no more accommodating than they have to be. To some degree, the lack of culture and refinement we see in many of today’s men is the fault of women who ask for, and get, little or nothing. If a girl sees herself as a lady, she will expect her escort to behave like a gentleman. He will respect her if she respects herself.”

Of course, this isn’t often the case. As women take to social media these days by the millions to tell their stories, we are becoming more aware than ever before that some men will disrespect women no matter what women do.

With teachings like this, it’s no surprise that Dobson doesn’t find Trump’s behavior shocking. Dobson seems to believe that most men would act in the same way, given the chance — or at least they would if their lust were enticed by naked pictures. Thankfully, many men are speaking out and saying that men can do better.

Ted Bundy said that serial killers are just average guys, our sons and husbands, just waiting until viewing the wrong film hits that switch that turns them into rapists and killers. The Religious Right might be inclined to agree with Bundy, but I don’t believe that the serial killer is Everyman. Ted Bundy, Donald Trump, and Josh Duggar need not represent our men. We can do better than that.

As atheists, we are free from the doctrine of being born into sin. We can make the choice to do right and treat women with respect, unconditionally. We can teach boys that they are evolved human beings rather than slaves to their every whim. We can teach our girls that they deserve respect, because they are people.