While Donald Trump in the White House will be a threat to Mexicans, Muslims, African-Americans, women, and our democracy as a whole, the Family Research Council’s Tony Perkins found a way to create a false equivalency by saying on Fox News Channel that Hillary Clinton would be a threat to… Christianity.

That’s right. The Methodist who once taught Sunday school, frequently talks about our “God-given potential,” and who has been accused (unfairly) of scheming against Bernie Sanders by pointing out his atheism is somehow a threat to Christians. 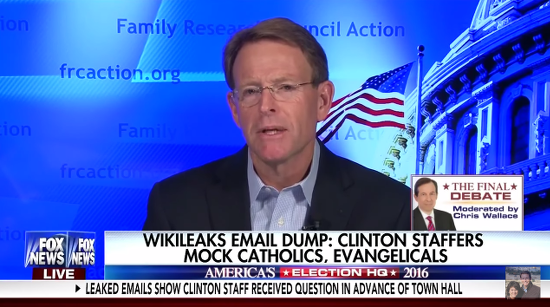 “Many of the most powerful elements of the conservative movement are all Catholic (many converts) from the [Supreme Court] and think tanks to the media and social groups,” [Center for American Progress fellow John] Halpin wrote in the 2011 email, according to WikiLeaks. “It’s an amazing bastardization of the faith. They must be attracted to the systematic thought and severely backwards gender relations and must be totally unaware of Christian democracy.”

Palmieri responded that she believes Murdoch, Thomson and many other conservatives are Catholic because they think it’s “the most socially acceptable politically conservative religion.” “Their rich friends wouldn’t understand if they became evangelicals,” she wrote. Podesta did not respond in the email thread.

Basically, people who are not Hillary Clinton once said powerful conservatives tend to be Catholics rather than evangelicals because it’s more socially acceptable. That’s very true, since people like Tony Perkins have make evangelical Christianity synonymous with cherry picked bigotry. (As opposed to Catholics, who have bigotry built into the core even if they choose to ignore it.)

All of that shows Perkins getting upset over nothing, which is all he’s good at these days. His Persecution Complex means he finds reason to whine even when there’s no substance to whine about.

Tony Perkins is a much bigger threat to evangelical Christianity than Hillary Clinton will ever be. No one’s ashamed of being an evangelical because Clinton acknowledges that other people exist; they’re ashamed because Perkins is a despicable human being who acts like a fool in the name of his faith. You don’t need to look any further than his continued support of Trump is see how true that is.