Deepak Chopra Slams Donald Trump for Not Having a “Fact-Based View of Reality.” Seriously.

In an essay for the San Francisco Chronicle, Deepak Chopra, best known for making himself wealthy by selling a steady diet of pseudoscience and large words, basically accuses Donald Trump of being a giant phony.

Someone get me a pot and a kettle so I can make a point. 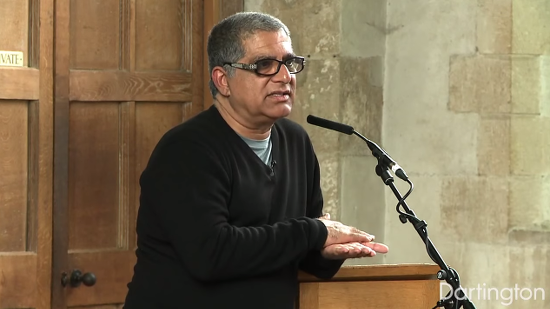 More than one observer has remarked that the tactics of the Trump campaign, which misses no opportunity to turn the truth upside down, have taken us to a crossroads…

There are also some questionable American qualities at work, such as our history of ornery politics and a fascination with celebrity that permits bad characters to be given a pass simply because they are famous in the tabloids. Into this mix, however, must be added a troubling American trait, the passive willingness to let wrong turn into right… Trumpism touts wrong as right with passionate intensity, while countless people who should see him for what he is lack all conviction to counter him.

According to a fact-based view of reality, the U.S. is not in imminent danger from terrorism on a mass scale…

… Collective consciousness holds up a mirror to the truth, and in the end there is no arguing against reality, wherever it takes us… If anyone fails to stand up, stops speaking the truth, stays at home on Election Day, or votes out of spite and resentment against Clinton, the reflection that results from such feeble lack of conviction will be very dark. It will show each of us things about ourselves we don’t have to see.

That, again, is Deepak Chopra, who’s selling human holograms to “create a synergy that leads to a greater societal transformation.” Whatever that means.

The same Chopra who promotes the “power of Primordial Sound Meditation.”

The same Chopra who was the subject of a research paper called “On the reception and detection of pseudo-profound bullshit.”

That guy thinks Donald Trump is a shameless huckster.

(Screenshot via YouTube. Thanks to Karl for the link)

September 26, 2016
Pat Robertson: On Halloween, Your Kids Should Be "Praising the Lord," Not "Worshiping Satan"
Next Post