Pat Robertson: On Halloween, Your Kids Should Be “Praising the Lord,” Not “Worshiping Satan” September 26, 2016 Hemant Mehta

Pat Robertson: On Halloween, Your Kids Should Be “Praising the Lord,” Not “Worshiping Satan”

Halloween: The day when kids dress up, get candy, and worship Satan.

Or at least that’s what Pat Robertson thinks they do.

In response to a question from a viewer worried about her son attending a haunted house that includes a “demon DJ” who “encourages people to dance,” Robertson warned her to stop her son before it was too late. 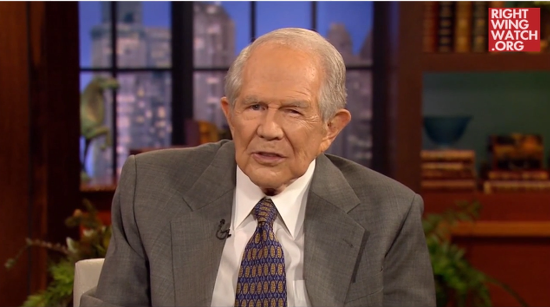 … Explain to him who the Devil is. Explain to him the Devil wants to destroy you. The Devil, you know, seeks who he may devour. He’s out to kill you. And he’s gonna put everything nice in your way that’s gonna seem like fun — there’s pleasure and sin for a season — but the answer is, mother, don’t let your babies grow up to be demon-worshippers, if I can quote from Willie Nelson. Don’t let him do it.

… There needs to be alternative Halloween celebrations in churches, where they have all the games, and all the fun, and all the nice, pretty girls, and all the handsome boys… and they’re praising the Lord instead of worshiping Satan.

Halloween has become a night when the devil rejoices.

Someone doesn’t know the difference between fact and fantasy… but I guess that’s to be expected from a guy who believes his Savior rose from the dead.

September 26, 2016
Detroit Protesters Interrupted a Church Service After the Pastor Asked for Obscene Amounts of Money
Next Post