You have to be a truly despicable human being when screwing people out of their life savings in a Ponzi scheme, in which you get a kickback from their investments, is the second worst thing you’ve ever done.

But that’s the story surrounding Pastor Jack Schapp, whose First Baptist Church of Hammond just got sued for bilking members out of their money. 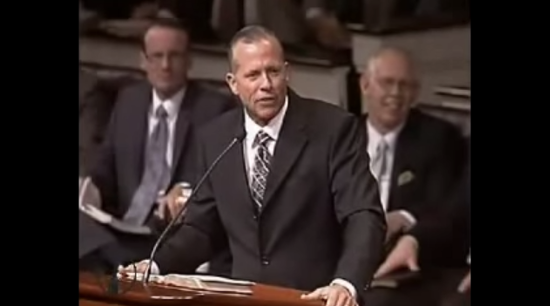 Schaap, you may recall, is currently in prison where he’s serving a 12-year sentence after having sex with an underage member of his church.

Turns out he screwed adults, too.

According to the lawsuit, filed Thursday, Schaap, in 2006, hired a man named Thomas Kimmel to “provide one-on-one financial counseling at the church.” He would provide parishioners with “financial, investment, budgeting and debt counseling.”

Pastor Schaap informed parishioners from the pulpit that Mr. Kimmel’s financial services would provide them with more money which would, in turn, allow them to give more money to Defendant First Baptist Church and aid its ministry and mission.

All of that may perfectly normal practice for churches of that size, but things got out of hand quickly.

Kimmel began urging church members to invest their money in “Sure Line Acceptance Corp.” He told everyone it was a Christian-run organization that operated car lots and helped finance cars in a sub-prime market. More importantly, he said he had invested $450,000 with the company while the church (and Schaap) had invested $1,000,000.

No wonder people figured it was a good deal. They began handing over their cash. What they didn’t realize was that Kimmel and Schaap had an incentive for getting people to invest in that company:

It’s worth noting that David Gibbs, an attorney for the church, warned Kimmel and Schaap they might be violating Indiana law since these were unlicensed securities and the parishioners were “largely unsophisticated investors.” They didn’t listen to him.

61-year-old Joseph Elwell and his wife Crystal eventually invested $225,000 through this program, while Deborah and Robert Baldwin invested approximately $235,400. Those four are the plaintiffs in this case.

All of them began receiving regular interest payments on their investments, which signaled to them that everything was going well. What they didn’t realize was that those payments were actually coming out of the newer investments into the program. In other words, they had no idea this was a Ponzi scheme.

At one point, as new investments began to trickle down, the Baldwins were told they wouldn’t get an interest payment. Check out the excuse they were given:

In January 2012, Sure Line sent correspondence to the Baldwins informing that Sure Line was unable to make interest payments that month. At that time, the Baldwins were informed by Mr. Kimmel that the inability to pay had to do with new regulations under the Dodd-Frank Act. They were led to believe by Mr. Kimmel that everything else was fine and that their investment remained secured.

Contrary to the representations made to the Elwells and the Baldwins in January 2012, Sure Line’s inability to pay was not based on new government regulations but on a financial collapse precipitated by years of undisclosed and misrepresented financial problems and, more importantly, the theft of investor funds for use in a Ponzi Scheme orchestrated by Mr. Kimmel.

Ultimately, the scheme fell apart in January 2012 when there was not enough new investor money coming in to perpetuate the scheme and continue the illusion of legitimacy and profit.

And by the way:

Mr. Kimmel was not actually licensed to provide financial advisory services or act as a seller of securities.

The Times of Northwest Indiana points out that Kimmel, like Schaap, is currently sitting in prison:

[Kimmel] was sentenced in 2014 to 22 years in prison and ordered to pay more than $16.5 million in restitution after being convicted in federal court in Raleigh, N.C., of defrauding hundreds of investors around the country.

It’s such a sad story of a corrupt church leader hiring a corrupt businessman to steal money from people who put their trust in them. It’s hard to think of how the church will defend itself against these allegations, but this will ultimately play out in court. Let’s hope justice is served.

May 8, 2016
Catholic Defends His "VI6SIX" License Plate, Saying It's Not a Reference to the Biblical 666
Next Post

May 8, 2016 Someone Set Up a Gubernatorial Campaign Website for Disgraced Alabama Chief Justice Roy Moore
Browse Our Archives
What Are Your Thoughts?leave a comment