Catholic Defends His “VI6SIX” License Plate, Saying It’s Not a Reference to the Biblical 666 May 8, 2016 Hemant Mehta

Catholic Defends His “VI6SIX” License Plate, Saying It’s Not a Reference to the Biblical 666

Toronto native Daniel D’Aloisio is either the victim of an overzealous government or an *incredible* troll.

The practicing Roman Catholic was told by the Ministry of Transportation that he had to give up his license plate — which he’s had for 15 years — because it reads “VI6SIX” and violated the rules regarding religious plates.

D’Aloisio insists the plate isn’t a reference to 666, the Number of the Beast: 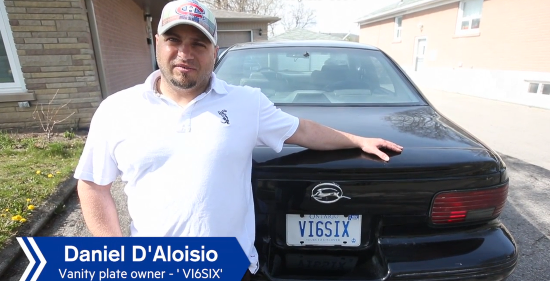 “It was a combination of what I wanted to say about Mario Lemieux, the six Stanley Cups I shared with my dad and all the people in my family,” he said.

The 42-year-old said he spent a lot of time deciding what characters to include on the plate, explaining that he and his dad were big fans of the Pittsburgh Penguins centre and that they had watched the Montreal Canadiens win six Stanley Cups before his dad died.

D’Aloisio said VI is short for “vie,” which means life in French, and added that years ago, when he picked out the plate, he intentionally kept it to six figures because there were six members in his family.

Assuming he’s being honest, this isn’t a trivial issue. If the government revokes his plate because one person complained 15 years after the plate was issued, where does this stop? What happens when someone else complains that an innocuous combination of numbers and letters is an attack on his faith? Would a license plate with the letters “FSM” be allowed?

For now, the Ministry of Transportation sent D’Aloisio an alternative plate (with his permission). But it doesn’t resolve the outstanding issues.

(via Canadian Atheist. Screenshot via The Star)

May 8, 2016
Christians Will Host a Proselytizing Training Session the Night Before the Reason Rally
Next Post

May 8, 2016 Pastor Jack Schaap's Indiana Megachurch is Being Sued for Perpetuating Investment Fraud
Browse Our Archives
What Are Your Thoughts?leave a comment