Pastor Is Aghast Over Transgender “Perverts”; Forgets He Himself Exposed Kids to an Actual Child Molester April 26, 2016 Terry Firma

Pastor Is Aghast Over Transgender “Perverts”; Forgets He Himself Exposed Kids to an Actual Child Molester

Greg Locke, a pastor from Mount Juliet, Tennessee, is mad at Target after the corporate office decided that transgender customers may use whichever bathroom comports with their gender identity. So he stormed into the local Target store, asked for the manager, and gave her a piece of his mind.

We’ll never know whether the exchange he describes really took place; being the armchair hero that he apparently is, he made a video about it after the supposed fact, filming himself in the Target parking lot.

It’s a wonder the lens didn’t get all spittle-flecked during Locke’s two-minute diatribe, which you can admire here. 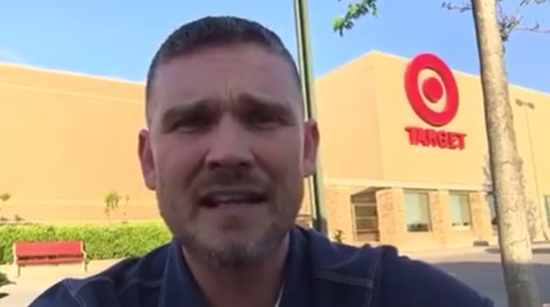 Locke’s point, hissed directly at Target’s powers-that-be, is this:

Your political correctness has caused you to do something extraordinarily stupid. … Because you’re not targeting and being inclusive to transgender people by doing this. They make up 0.3 percent of the population. What you are targeting are perverts, pedophiles, people who are going to hurt our children.

He needs a little help with his language — and his logic. From the context, you can tell that he doesn’t actually mean that the store “targets” (ha!) “perverts” and “pedophiles,” but accommodates them. And that accommodation, Locke says, is terrible. Children are going to get hurt.

Well, that fear makes no sense, as we’ve discussed here.

There’s every reason to laugh at Locke, or to at least take his comments with just enough salt that the hypocrisy becomes easier to swallow. See how concerned he is for the welfare of wee ones? How committed he is to keeping perverts away from innocent children? Funny story.

[W]hat Pastor Locke doesn’t tell viewers is that he knows a thing or two about perverts preying on kids. Less than two years ago, Locke hired a 34 year-old youth pastor who was later arrested on multiple accounts of raping a 13 year old girl from youth group at his previous church in North Carolina.

So maybe Locke, the pervert-hunter, might have tried just a little harder to screen applicants for a job at his church, lest he expose kids to sexual predators.

Reports of priests and pastors sexually assaulting their underage charges are, of course, truly a dime a dozen. By contrast, we’re still waiting for the first confirmed report of a transgender person who sexually attacked someone in a restroom. Libby Anne, in this great post, coolly addresses all the unnecessary fears and couch-fainting around the transgender-bathroom issue.

But maybe Locke will have the last laugh after all? His video has gone viral, with currently more than 14 million views. (How many of those viewers just wanted to rubberneck at the crazy angry guy, I have no idea.)

Meanwhile, more than 500,000 people have already pledged that they’ll boycott Target over the matter.

Whether the retailer will really take a hit remains to be seen. As Patheos blogger Horus Gilgamesh reminds us,

[M]any of these potty-shy petitioners also promised to boycott Target over [its] support of marriage equality and employment equality over the last few years. Why the need for a new boycott? Apparently, in practice, one’s deeply held religious convictions are no match for affordable housewares.