Christian Pastor Steven Anderson spent part of a recent sermon up at a whiteboard detailing to his congregation what clothes men and women should wear.

Pants? Don’t you dare think about being a woman who wears pants. Skirts? A dress? Fine. But no pants. Because Jesus. 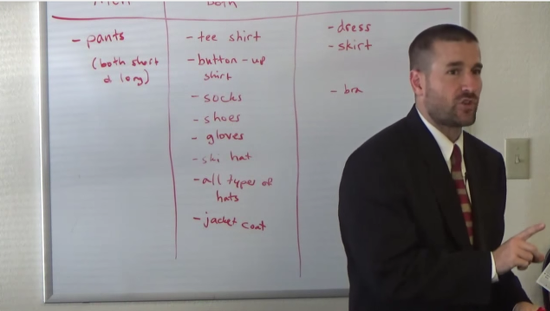 There’s a biblical reason for it — it comes right after a passage about how you should help a donkey up if it’s lying on the ground — but the point is that he’s making a huge deal out of something utterly meaningless. And he’s treating his adult congregation like a bunch of kindergartners.

Obviously, Anderson is implementing a sort-of Christian purity test. If you break these rules, you’re not really a True Believer®.

It’s not the first time he’s told women what they can’t wear.

A couple of years ago, he elaborated on the lengths of skirts:

This is an ongoing habit of his. He’s out to be a fundamentalist’s fundamentalist. Only his literal interpretation of the Bible is acceptable and everyone else is a hell-bound sinner.

It’s gotta be the Donald Trump phenomenon — they’re drawn to confidence, bombast, and the idea that they’re better than everyone else. After all, why bother being politically correct when you can be an arrogant asshole?

March 14, 2016
David Barton: Violent Crime Was Reduced by 75% in Las Vegas Due to "Biblical Teachings"
Next Post

March 14, 2016 Why This Pi Day is Better Than the Last One
Browse Our Archives
What Are Your Thoughts?leave a comment