Here’s an interesting split: If you’re an evangelical pastor, you might endorse Ted Cruz since he’s the guy who believes what you believe, is just as much of an anti-gay bigot, and thinks access to health care for women is something we have to eliminate.

But if you’re an evangelical pastor who thinks God wants everyone to be rich, then Donald Trump is your man. At least that’s the case for prosperity gospel preacher Mike Murdock, who endorsed Trump at a rally yesterday.

If you’re not familiar with Murdock, he’s the sort of guy who says that your credit card debt will be wiped out if you give him money, that “$1,000 cannot reproduce until it enters into a covenant with the soil” (by which he means his ministry), and that “I haven’t seen a woman as good looking as a $100 bill.”

So it’s a perfect match, really. 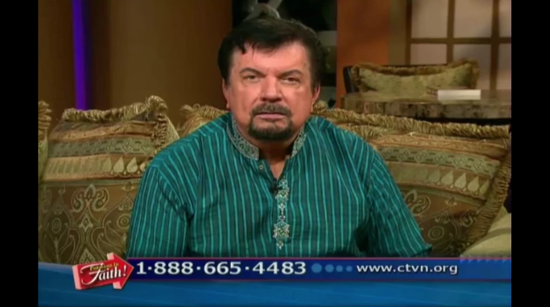 Someone this despicable belongs in Trump’s camp.

The bigger question is why so many Christians would want anything to do with either one of them.

February 16, 2016
Seth Meyers Takes a Closer Look at the Fight Over Justice Scalia's Successor
Next Post

February 16, 2016 A Darwin Day Resolution Has Stalled in the Arizona Senate, but You Can Help Push It Forward
Browse Our Archives
What Are Your Thoughts?leave a comment