Bernie Sanders: I’m Only Running for President Because of My “Very Strong Religious… Feelings”

Speaking in front of a New Jersey crowd Wednesday night, Senator Bernie Sanders was asked about his faith. It’s a pretty standard, even if irrelevant, line of questioning faced by presidential candidates. In a world of separation of church and state, a candidate’s religious holdings should have nada to do with the way they govern. 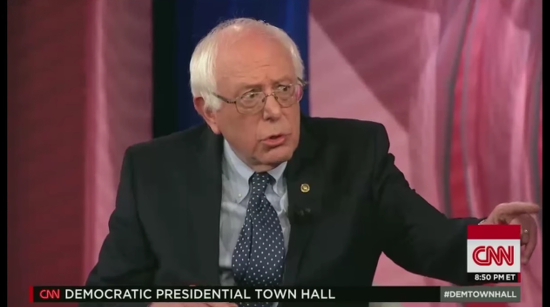 But Sanders, being Sanders, just had to go ahead and challenge that. He started off by deflating the atheists who were rooting for a secular candidate, saying:

It’s a guiding principle in my life, absolutely, it is. Everybody practices religion in a different way. To me, I would not be here tonight, I would not be running for president of the United States if I did not have very strong religious and spiritual feelings.

It’s a far cry from what he told the Washington Post last week when he said:

It felt sort of like a punch to the gut. Here was a candidate who, throughout decades of public service, had always been a staunch advocate for keeping religion out of politics, and he was saying that religion was the reason he was running?! Sanders, who has in the past indicated that his Judaism was a function of culture instead of belief?! HOW COULD HE BETRAY US?!

Fortunately, he offered some clarity on the subject as he continued:

I believe that, as a human being, the pain that one person feels, if we have children who are hungry in America, if we have elderly people who can’t afford their prescription drugs, you know what, that impacts you, that impacts me,” Sanders said. “And I worry very much about a society where some people spiritually say, ‘It doesn’t matter to me. I got it, I don’t care about other people.’ So my spirituality is that we are all in this together and that when children go hungry, when veterans sleep out on the street, it impacts me. That’s my very strong spiritual feelings.

Empathy. That’s Sanders’ religion. And across the nation, there was a sigh of relief.

In reality, that’s not a religion. That’s a philosophy on life. But strategically, it makes sense that he would couch the explanation in terms unrelated to the philosophy, largely because he faces an uphill battle as a secular candidate with a Jewish background.

One might scowl at his pandering, and that’s understandable to some end. I know I’d certainly prefer candidates who unabashedly say religion will have nothing to do with the way they govern. But I’d certainly prefer Sanders be elected rather than getting stuck with one of the radical Christians on the right. If that means Bernie’s gotta declare love a religion, count me among the faithful.

You can watch the video here.

February 4, 2016
Christian Leader: Anti-Abortion Activists Should Be Cleared of Crimes as Prosecution is Persecution
Next Post

February 4, 2016 Paul Ryan's National Prayer Breakfast Comments Highlight the Problem with Religious Republicans
Browse Our Archives
What Are Your Thoughts?leave a comment